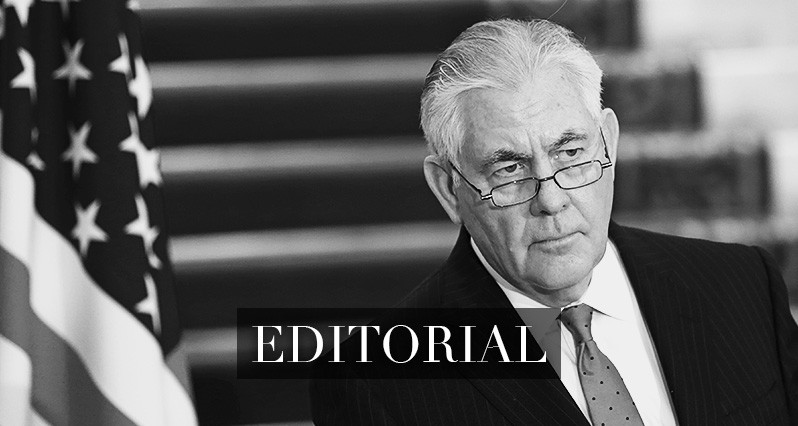 Welcome to Turkey. We at Daily Sabah expect you to take a leading role in ending the manic nature of what currently stands as U.S. foreign policy. If not, it is better for you to know that Turkey has neither the patience to wait any longer nor the tolerance to listen to any more empty statements.

First and foremost, the U.S. should sever all ties with the PKK and its affiliates no matter what initials they use. Turkey will no longer put up with this nonsense. The SDF, YPG, YPJ, TAK and PJAK all are one and the same.

You should carefully weigh what you will say to Turkish officials tomorrow. If you believe telling them that the YPG will be withdrawing from Manbij will satisfy Ankara's concerns, you are greatly mistaken.

Each and every trained and equipped PKK and YPG member is a clear and present danger to Turkey's security. However, these terrorists also pose a serious threat to the EU. A trained terrorist can easily change alliances, as recent reports about Daesh militants joining the YPG show.

The PKK and all its branches, as well as all other terrorist groups, are Turkey's enemies. If the central U.S. objective is to fight Daesh, what Turkey has done in this fight is second to none. The coalition and NATO are there to help. The Turkish Armed Forces (TSK) are perfectly capable of eliminating all such threats.

U.S. officials, especially military officials deployed in the region, need to learn respect and humility. Their irresponsible remarks are causing great harm. If you behave, we will be a great friend.

We at Daily Sabah do not know if your visit will finally lift the veil of confusion that seems to blind the current U.S. administration, but there are a few facts that all self-respecting diplomats need to know. Turks do not like the U.S. Ordinary Turks on the streets believe the U.S. is a cause of instability and a threat. They do not trust statements coming from Washington. Such anger approaching hatred is something new. Any American diplomat who thinks this is not fair should come forward and show why that is the case.

These days, as U.S. influence as a superpower in the Middle East wanes, no one takes it seriously anymore. If U.S. weakness is transforming it into a nonfactor, it would be all well and good. Unfortunately, it is becoming a cause for volatility. The Middle East may be the first region where such deterioration occurs, but it certainly will not be the last.

Countries in the region are now calling on other outside actors and openly voicing their distrust of the U.S. If you cannot manage a crisis, the least you could do is not stoke the fire. If you are incapable of formulating a strategy, you should at least abide by the role assigned by your regional allies. You should use your considerable remaining strength for peace and stability, not chaos.

Bilateral relations can still be rescued. However, as things stand, Turkey will not lift a finger to please you. It is about time you thought carefully and did something that made Ankara happy.

Mr. Tillerson, we, as Daily Sabah, hope that you are coming to make such a gesture and depart without ruining everything. Last chances should not be wasted. The next U.S. official who wants to save ties may find all doors shut.