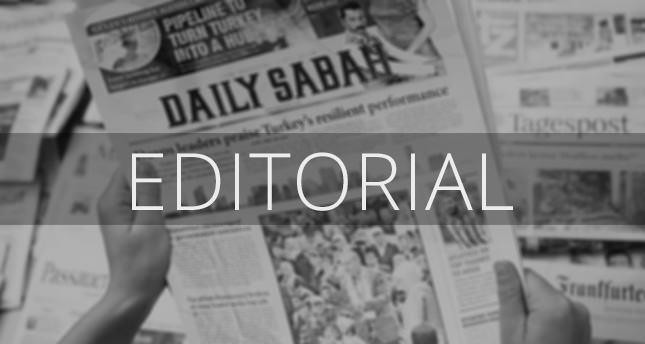 Reading The New York Times editorial page is no easy task. Most times, one cannot be completely sure whether bad journalism or ideological blindness is to blame for the paper's ability to get things wrong when it comes to Turkey.

In the twisted world of The New York Times Editorial Board, the designated terrorist organization PKK's founder Abdullah Öcalan, who is currently serving a life sentence in Turkey for his involvement in deadly attacks against Turkish security forces and civilians alike, is "a leader jailed as a terrorist." Turkey's efforts to stop terror attacks and arrest would-be suicide bombers before they reach Europe, including the declaration of a state of emergency in July 2016, were part of a crackdown on dissent. Fetullah Gülen, who has been micromanaging a criminal empire from rural Pennsylvania, is a saint.

At this point, however, the Turkish people understand that their country's efforts to protect its national interests are bound to be criticized by The New York Times. In recent years, your newspaper has been at the forefront of every smear campaign against Turkey, its government and its friends and allies. The good news is that spreading fake news disguised as personal opinions won't change the Turkish government's policies or influence the public opinion in Turkey. To make matters worse, the number of Westerners who would buy into those lies is decreasing as the world changes, slowly and painfully, on U.S. President Donald Trump's watch.

It's time to forget everything you think you know about the old Turkey and meet the new Turkey. Here are the basics:

Fetullah Gülen isn't an 'Islamic cleric'. He is the leader of an armed organization that murdered 251 innocent people cold bloodedly, dropped laser-guided bombs on civilians, imprisoned critics and rivals on false charges, cheated its way into public institutions, and illegally eavesdropped on thousands of journalists, politicians, academics and businesspeople in Turkey. Gülen's shadowy organization continues to defraud American taxpayers through a network of charter schools in the United States.The PKK isn't a national liberation movement or a group of eco-friendly idealists. It is a terrorist organization that killed tens of thousands of innocent people in Turkey. In addition to carrying out suicide attacks, such as two car bombings in downtown Ankara and the December 2016 assault near Vodafone Arena in Istanbul, PKK terrorists have a long history of kidnappings, arson, robberies and assassinations – most of which targeted members of Turkey's Kurdish community. Whether The New York Times likes it or not, Turkey will take necessary steps to crack down on the group at home and abroad, especially in Syria and Iraq, to protect its own citizens from acts of terrorism.

If The New York Times Editorial Board really wants to promote a better understanding of Turkey and the ongoing crisis between Ankara and Washington, they should remember the following:

Turkey is not an isolated country. It is a regional powerhouse whose level of economic stability could either help or hurt Western interests. Efforts by the Trump administration to cripple the Turkish economy, whether by sanctioning cabinet ministers or raising tariffs, will inevitably take down European banks and result in the collapse of other emerging markets.

The Trump administration wants to contain Iran in the Middle East, especially in Syria, and keep Israel safe from regional threats. But it remains unclear who will implement that strategy. The PKK's Syrian branch, which begged Iranian-backed militias for help as Turkish troops and the Free Syrian Army advanced towards Afrin? Or perhaps a handful of U.S. military advisors stationed in northern Syria? By alienating Turkey, Washington will kiss its national security strategy goodbye.

If The New York Times actually cares about the rule of law in Turkey, its editorial board must speak up against the Trump administration's misguided policy of intimidation and harassment. Turkey is a country with no colonial legacy. It isn't some banana republic whose government will fold because the White House or a major newspaper's privileged editors could be furious.

Moving forward, Turkey will cooperate with — or compete against — the United States, the European Union, Russia, China and Iran depending on its own notion of national interest. The Turkish people, not The New York Times or the United States government, get to decide what kind of future they want for their children. Our job isn't to tell the ideologues and propagandists in New York or Washington to like or approve of our country's decisions. But one way or another, they will have to learn to respect them.