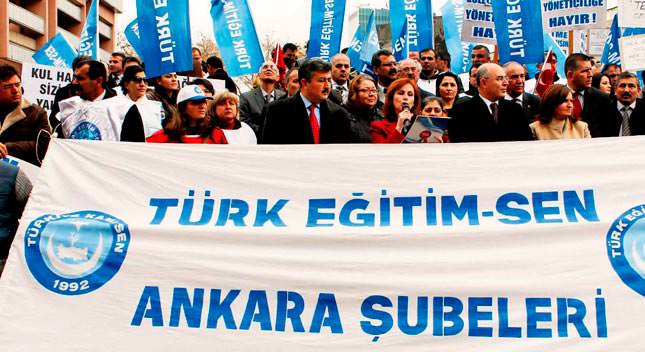 The government's attempt to reform the education system and improve quality faces criticism by several unions. Unions claim the reform will lead to purge of a large number of teachers.

Several teachers unions in Turkey went on a one-day strike over a new education bill yesterday, claiming the legislation, which will restrict the term school administrators serve and restructure the Ministry of National Education's bodies overseeing assignment, is a purge of education officials.

The bill, approved by National Education Committee of the Turkish Parliament, will be voted on by the entire body shortly.
Minister of National Education Nabi Avcı said in a televised interview the bill was unfairly criticized, particularly regarding the term limits for school principals. "Principals' original duty is teaching," said Avcı. "The office of principal is only a brief tenure. With the new bill, their term will end but not necessarily so. We assess their performance in improving students' overall success and improving the quality of education. If they succeeded, they will continue serving as principals."

Among the changes the bill would make to the education system is the termination of duty for school principals who served in that position for four years.

They will be able to continue teaching at public schools. Teachers must graduate from the Faculty of Education and pass an exam to be qualified. Following the exam, the teacher will have to work at least one year as an intern before tenure and will be interviewed before assignment.

The interview, which will be held by Education Ministry officials, is criticized by the teachers' unions as a means of favoritism in assignment of teachers.

Prep schools - or "dershane" in Turkish - will be shut down by 2015 and teachers working at these institutions will be hired by public schools. The government will provide incentives to these schools for their transformation into primary schools, secondary schools, dormitories and public education centers. Critics say the bill will lead to the dismissal of senior officials at local education bodies. If the law is approved, officials who served four or more years may be suspended from duty immediately.