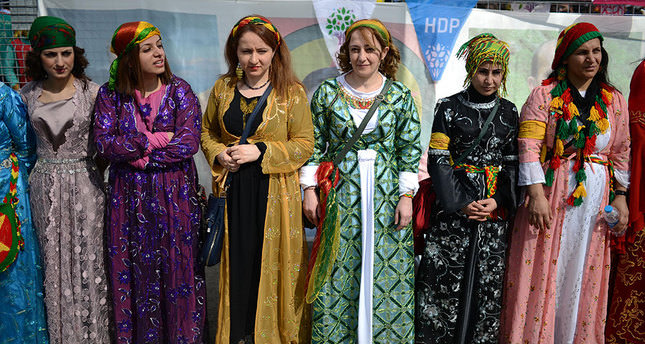 ISTANBUL — Large crowds gathered yesterday at Istanbul's Kazlıçeşme arena for an event organized by the People's Democratic Party (HDP) on the occasion of Nevruz, a holiday which marks the beginning of the spring and Kurdish New Year. While the actual date for Nevruz falls on March 21, Istanbul residents celebrated Nevruz on March 23, allowing for huge crowds to gather due to it being the weekend.

Speaking at the celebration, the Kurdish-based Peace and Democracy Party (BDP) co-chair Selahattin Demirtaş said, "We are not going to war like other [Turkish political parties], we are going to the ballot box and we will not surrender to provocations." "Happy Nevruz" banners written in Kurdish were hung in the arena and 700 people assigned by the HDP's organization helped attendees. Participants wearing their traditional outfits danced the "halay."

A letter written by the Kurdistan Workers' Party (PKK) leader Abdullah Öcalan, who is serving a life sentence on Imrali Island was shared with the crowd. Sending his best regards to the huge crowd, he expressed his wishes to maintain peace in the country.

"Last Nevruz, we extinguished the fire of conflict and lit the fire of peace. This process was to establish a dialogue. Both sides tested each other's sincerity during this period.

Even though the government was slow to take action, both sides displayed firm stances, but a legal framework is inevitable now," Öcalan said.

Referring to the demands that HDP Istanbul mayoral candidate Sırrı Süreyya Önder should withdraw his candidacy, Önder called out other parties saying, "They asked me to withdraw my candidacy so the Republican People's Party (CHP) votes would not be split. We pledge a social municipality, if they can pledge the same, I will withdraw."

BDP co-chair Selahattin Demirtaş urged the crowd to vote for the HDP in the upcoming elections on March 30 and stated, "We are coming close to presenting HDP as a party of brotherhood in Istanbul. The BDP and HDP municipality will make a difference."