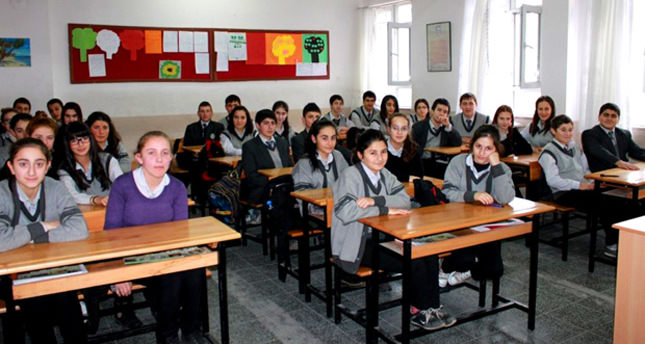 by Safure Cantürk Apr 28, 2014 12:00 am
ANAKRA — Minister of Education Nabi Avcı has said the ministry's survey of 5,000 teachers and 5,000 students showed both teachers and students had more confidence in public schools, as reforms in education and students' dependence on private prep schools for admission to universities had decreased.

Avcı said his ministry conducted the survey on opinions of the Transition from Primary to Secondary Education (TEOG) exams, a series of exams that replaced a single nationwide exam. He said the new system instilled confidence among students and parents on the quality of education in public schools. "This exam brought schools and teachers to the forefront, with both teachers and students concentrating on lessons rather than forcing students to study subjects not effectively taught in the curriculum. Teachers are more focused on effective teaching, while students feel less pressure due to the exams."

Avcı said the Program for International Student Assessment (PISA) ranked Turkey among the countries with the highest attendance rates because most students used to skip school to attend prep schools. "Now students have to attend school because studying for the exam is only possible by attending classes," he said.

The minister stated that through the TEOG, the ministry was able to analyze the accomplishments of students and teachers. "If students taught by a teacher are overwhelmingly successful on the exam, the teacher will be rewarded. If not, he or she will be deprived of promotion, for instance," he said.

The TEOG exam is held on six subjects for sixth, seventh and eighth grades. This year's exam will be on Monday and Tuesday.
Before a series of education reforms by the government in the past decade, overcrowded schools and a shortage of teachers forced students to turn to prep schools after they fell behind in the curriculum with teachers unable to cover all the subjects in one semester.
Prep schools that offer students classes for university entrance exams will be shut down by Sept.1, 2015. The government has provided incentives to prep schools for their conversion to private schools.

The government's move to shut down prep schools drew the ire of the Gülen Movement, led by controversial cleric Fethullah Gülen. The movement runs a global network of educational institutions and a local network of prep schools and private schools operating under different names. The movement openly declared war against the government and launched a defamation campaign against the Justice and Development Party (AK Party). The movement is accused of using students that are educated in private and prep schools to infiltrate state institutions to expand its clout.

Prep schools, primarily tasked to prepare students for the nationwide university entrance examination, emerged in the 1970s as a result of a problematic educational system and then turned into a lucrative source of income for organizations running educational institutions across the country, particularly the Gülen Movement. The prep school sector brings in approximately $1 billion (TL 2.13 billion) each year, according to the government, and Gülenists are estimated to control 40 percent of these prep schools.