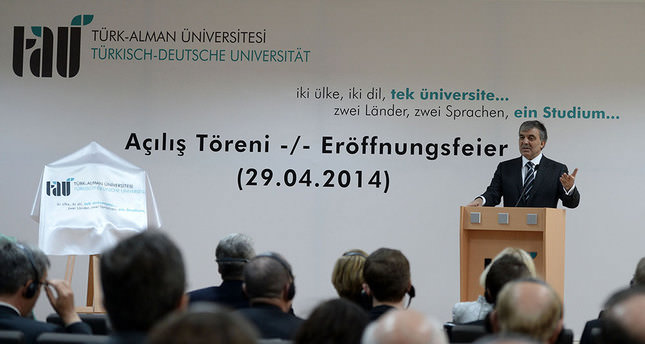 by AA
Apr 29, 2014 12:00 am
ISTANBUL — Turkish President Abdullah Gül has used an official visit by German President Joachim Gauck on Tuesday to praise a joint Turkish-German University in Istanbul.

Speaking at the inauguration of the technology research university located in the Beykoz district of the city, Gül said the institution was a logical step towards bringing bilateral relations to a new level.

"I believe that this technology-based university will make a great contribution to Turkey. We obviously long for making use of the discipline of German technology," Gül said.

Gül, speaking about the increasing trade value between Turkey and Germany and the 3-million-strong Turkish population living there, said the two countries were moving towards copious scientific exchange and cooperation.

"As there are many Turks and new generations living in Germany, I believe that this university will play an important role for both Turkish-origined Germans as well as Germans' relations with Turkey," Gül said. "Executives of German companies in Turkey - especially in engineering - will employ educated people from a German-Turkish culture in the future, which will be quite significant."

Noting that he believed that the university would become leading and successful institution for all of Europe, Gül said he wanted it to become not a usual university but one which people would research and compete to enter.