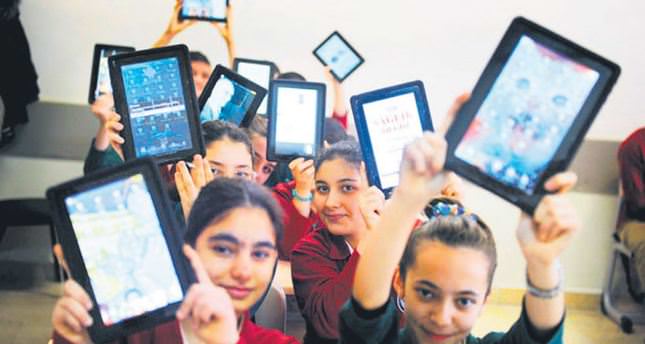 The Ministry of Education has distributed 732,000 tablet devices to date so far. Within the scope of the Movement to Increase Opportunities and Technology (FATİH) Project

The Education Ministry distributed 732,000 tablets to students as part of the Movement to Increase Opportunities and Technology project in an effort to improve the effective use of computers by students and teachers.

Within the scope of the Movement to Increase Opportunities and Technology (FATİH) Project, the Ministry of Education has distributed 732,000 tablet devices up to the present.

Information and Communication Technology is regarded as one of the fundamental phases of Turkish education. FATİH Project, which aims at effective use of this technology by students and teachers, made great progress with these activities which have been performed since November 2013, according to information received from the Ministry of Education (MEB).

The FATİH Project is focused on equality of opportunities and effective learning in education. One of the goals of the project is to set up smart boards (interactive white boards) and internet infrastructure readiness. The project envisages setting up smart boards and Internet infrastructure, distributing multifunctional cameras and copier machines, PCs and tablets for each teacher and student from fifth grade up to 12th grade and producing web-based content.

Within the scope of the Project, launched jointly by the MEB and the Ministry of Transportation, Maritime Affairs and Communications, 84,921 smart boards were set up in 3,657 high schools (excluding vocational high schools) from Nov. 22 to the end of 2013.

Multifunctional printers, cameras and local area networks were also set up in these schools. 62,800 tablets were distributed to students and teachers.

Except for schools which had local area networks established, second phase local area network tenders for Internet infrastructure in other schools was also completed. Tenders for smart boards and multifunctional printers carried out by Ministry of Transportation, Maritime Affairs and Communications were completed and signed.

The ministry did not suspend the activities which are performed by the FATİH project. The ministry carried out the initial distribution of 675,000 tablets with a ceremony attended by Recep Tayyib Erdoğan on Feb. 17, 2014. As a result, 669,086 tablets were distributed. Within the framework of the FATİH Project, 601,131 tablets for students and 130,755 for teachers were distributed.

In total 731,886 tablets were distributed across the country, according to recent data received from the MEB. 101,644 smart boards to be set up.

Activities performed by the Ministry of Transportation, Maritime affairs and Communications include: producing and distributing 347,367 smart boards , 13,645 A3 and 28,351 A4 multifunctional printers, evaluation of tablet PC set procurement tender (for 10.6 million tablet PC sets) and setting up second phase local area network tenders which are going to be completed in 2014. A management and support system will also be established while Internet accession in 3,657 schools is going to be continued across the country within the scope of the FATİH Project.

With the FATİH Project, Turkey is now one of the production bases in the field of information technologies. Domestically producing information technology tools and distributing them to the whole world will help make it possible for Turkey to develop software in all sectors, especially in education.
RELATED TOPICS