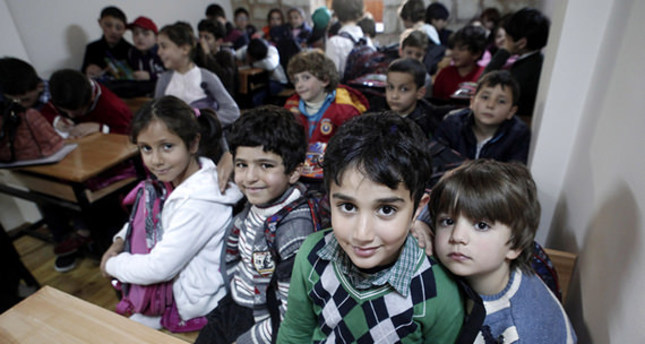 by Ihlas News Agency
Nov 17, 2014 12:00 am
The "Education Services Intended for Foreigners" notice that was issued by Turkey's Ministry of National Education will help Syrian children integrate into the Turkish educational system, said Azzam Khanji, head of Education for Aleppo's Revolutionary Transitional Council. It was announced as a big step for the education of Syrian children at a meeting co-organized with UNICEF and the Gaziantep Provincial Directorate for National Education. The notice enables many Syrian children to enroll in Turkish schools and allows the opening of temporary education institutions in Turkey.

There are 300,000 Syrian students throughout Turkey and nearly 40,000 in Gaziantep, according to the records of the Disaster and Emergency Management Presidency (AFAD). "From this point forward, we will make sure Syrian students continue their education," Khanji said, adding that they can prevent inappropriate behavior by uneducated children through this notice. Khanji said they prefer Syrian citizens to stay in their homeland instead of neighboring countries and added they handed out bags and stationery to 1 million Syrian students within the country's borders. He expressed his gratitude to Turkish people for their aid for Syrians. "It is hard to help this many people even if you are a big state. We thank the Turkish people and the government for their support," Khanji stated. Gaziantep Provincial Directorate for National Education Director Celalettin Ekinci noted that Syrian children have been affected by the civil war the most. He said they are trying to be a model for other provinces in Turkey, adding, "We wish to raise the children of this region, Syrian children, according to their own values as well as Turkish ones."