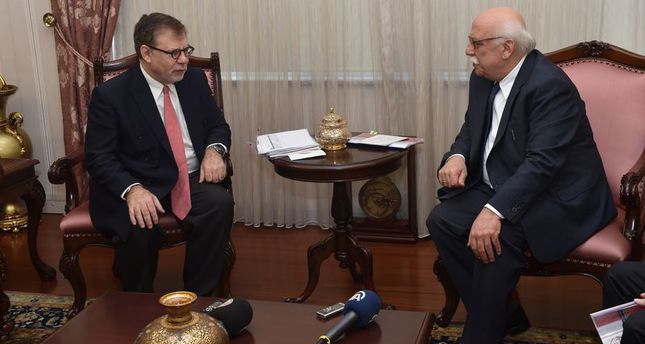 A proposal for a research department on Turkish-Ottomans was submitted by Joseph H. H. Weiler, head of the European University Institute, to Turkish Education Minister Nabi Avcı as he was received by the minister in Ankara.

Avcı and Weiler talked about the education of Turkish researchers in European universities, especially in the fields of economy, politics and law.

Cooperation between Turkish and European universities in all departments will be increased, Weiler said.

"It is high time for our institute to start a research department on the Ottomans to fill the gap in the department of history and civilization," he told an AA reporter in an interview.

"The Ottoman Empire and its culture played a great role in shaping the Middle East and the world. That is why we wanted the department in our institute," he said.

Stating that the institute has a rich archive for further studies, Weiler said those who are educated in the Ottoman department will be experts who can teach Ottoman history.

Through this department, a number of students will be hosted by the European Institute who will study for doctorate degree in the field, he said. He added that the proposal was welcomed by Avcı.

Such proposals from abroad are forwarded Turkey's Ministry of Foreign Affairs to be evaluated. Following the approval of a proposal, new departments are opened with the Ministry of National Education providing the lecturers needed.

Here is a selection of active research departments on Turkey:

- The Oxford Centre for Islamic Studies, which provides a meeting point between the Islamic and Western worlds of learning.