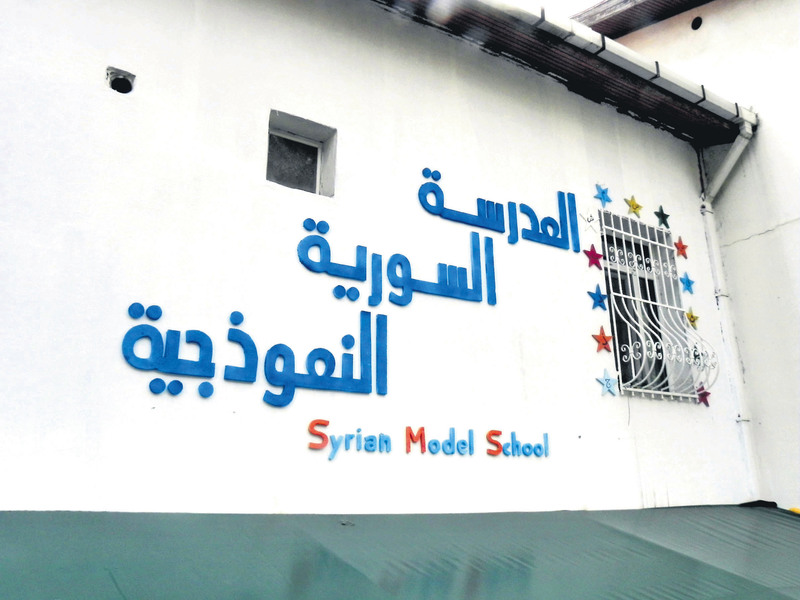 As the number of Syrian refugees increases due to the intensifying civil war in their homeland, the problems regarding education faced by refugee children have become more serious. A new school opened in Istanbul's Avcılar district for Syrian children that intends to support the education of those who do not know Turkish and cannot fully adapt to Turkish schools in the district

Syrian refugees who fled the civil war and settled in Istanbul's Avcılar district have rented a three-story building and converted it into a school for their children, as they do not know Turkish and cannot fully adapt to Turkish schools in the district. Additionally, they have made a deal with six teachers, who also came from Syria, to teach their children.

In order to save space, the families converted even the smallest rooms in Syrian Model School into a classroom and a playground for little ones. While the number of Syrian students who are brought to the school early in the morning by their parents is increasing, 133 students between the ages of 5 and 12 have enrolled in the school. The school, which continues to operate thanks to the donations of the Syrian parents, also offers lunch to the students.

The Director of National Education in Avcılar, Emin Engin, toured Syrian Model School and investigated the quality of education at the school. Engin, who was greeted with flowers, observed the kindergarten as well as the classes that offer mathematics, science and computer education lessons both in Turkish and Arabic, and inquired as to how he can help the school and its students.

The teachers and school adminsitrators said that they needed books in Turkish so they can offer better Turkish language skills to the students in the first, second and the third grades. Apart from that, they asked for one projector as well as visual materials or models in order to offer visual science lessons. Engin said that their needs and requests will be provided as soon as possible.

Engin told the press that he is constantly being informed about the education process at the school, and assured people that they will continue to support the education of Syrian children, who try to maintain their lives under difficult conditions. They will also provide any other efforts to help them adapt to life in Istanbul and Turkey.

The director reported that they take the students on field trips from time-to-time thanks to the contributions of the sponsors, and stressed that the children of the Syrian refugees who took shelter in the Avcılar district as well as all refugees in Turkey need education. "More than 133 students receive education at Syrian Model School under the guidance of Syrian teachers. In a way, they help our directorate, as the Syrian students who continue their education in the schools affiliated with the Ministry of National Education cannot be provided with a good education because they know little Turkish," Engin said.

He added that the students in Syrian Model School receive Turkish lessons from a Turkish teacher besides their lessons in Arabic from their Syrian teachers. "We thank the Syrians living in the Avcılar distict, as they support the education of their children. They pay the Syrian teachers from their pockets. They are not a burden on us in any way. We will continue to provide the necessary support to them," he emphasized. Syrian Model School does not require compulsory attendance and provides literacy lessons in addition to science, social studies and computer lessons. Currently, the students are not given a diploma or official document after graduating from the school.

According to Turkey's state-run Disaster and Emergency Management Authority (AFAD), there are currently 1.6 million Syrian refugees in Turkey. The agency is hosting 227,000 Syrians in 22 camps in the 10 provinces of southern and southeastern Turkey. These include six "container cities," which consists of shipping containers converted into housing units. The refugee camps offer a wide range of services for displaced Syrians from grocery stores to clinics, banks, playgrounds and schools for children. In January, Deputy Prime Minister Numan Kurtulmuş announced that $5 billion had been spent on Syrian refugees who fled the turmoil in their homeland since April 2011.
Last Update: Mar 09, 2015 3:51 pm
RELATED TOPICS