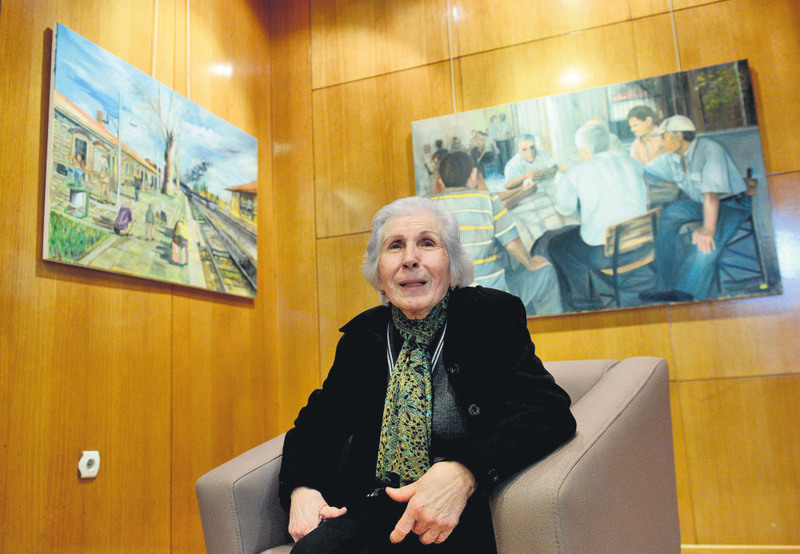 by Anadolu Agency Mar 20, 2015 12:00 am
Fatma Mihriban Aktarı's dream of having a fine arts degree she has yearned for since the 1940s is finally coming true at the ripe age of 84. Always inclined to painting, the retired teacher found her ambition stalled by poverty. Her dream will finally be fulfilled this summer when she graduates from Istanbul's Mimar Sinan University, a prestigious school specialized in the fine arts.

Born in 1931 in the northwestern city of Balıkesir to a family of Bosnian descent, Aktarı moved to Istanbul with her family when her father's business went bankrupt. She graduated from a teachers' institute, but she was ambitious to receive a fine arts degree from Mimar Sinan University's painting department. Her first hurdle was a quota for students. Determined to attend the school, she signed up for classes in the French language department of the university. Then came the devastating news: Her father passed away the day she would start her studies, and Aktarı had to drop out of school since she had to make a living for her family. "I had to work, so I started teaching," she said. She was assigned to a school in the city of Erzincan, but the school was closed down a year later. With no job prospects in the near future, she returned to Istanbul with her mother. When she found out Mimar Sinan was admitting students who graduated from a vocational high school, she applied again and was finally granted admission in 1951. She worked at a printing house while attending the university, but her dream of graduating from Mimar Sinan was dashed again when compulsory attendance was introduced the same year. Forced to choose between school and work, she dropped out again to make a living for her mother. She flourished in the printing business, and turned to designing movie posters - partially realizing her dream of being a full-time painter. She quit when she got married and her husband, a civil servant, was appointed to another city. She later returned to teaching until her retirement in 1988.

She scrapped her dream of pursuing a fine arts degree until one day in 2011. "I was watching TV when I saw a report that the government would grant admission to university dropouts. It said people of any age can enroll, and I thought I could be eligible as well. The problem was that I had no documents to prove that I attended the university because I angrily threw them out years ago. I have been living in Istanbul for decades, but I have not even walked near the university because I knew how upset I'd be when I saw the campus I wanted to be inside so much," she said.

Aktarı pondered what to do next and did not tell her husband or her two sons that she would apply for admission. "I was very frustrated. Finally, I decided to talk to my husband about it. He was a dropout like me. He encouraged me to do it, but he personally did not want to return," she added.

She sought out a way to get admitted without proper documents, and asked an academic, a friend of her son, what to do. "He asked me about my maiden name, as I was single when I first enrolled in the university. One week later, he gave me the good news. University staff has found documents in the archives proving my attendance. He even signed me up. I was about to pass out from joy when I heard that I was admitted," she said.

Attending the university since 2011, Aktarı has to change three buses to get to the campus every day but she does not complain. She looks forward to graduation as she prepares 10 sketches to present to a jury of academics in April for her thesis. Ironically, her thesis subject is "meeting and separation."

Motivated by her readmission, Aktarı devotes more time to painting. She opened an exhibition of her paintings, mostly consisting of landscapes, at an Istanbul exhibition hall. Her next ambition is to learn photography and create paintings out of photographs she will take in Istanbul's historic Balat district.
Last Update: Mar 20, 2015 10:16 pm
RELATED TOPICS