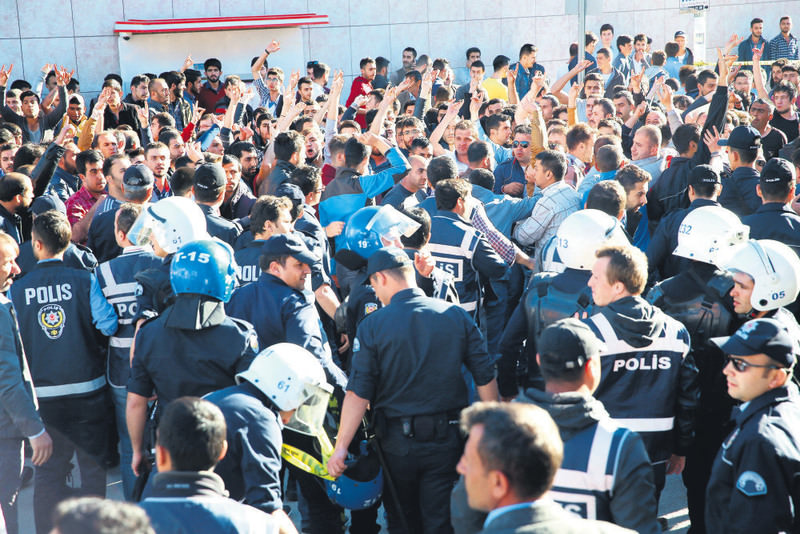 by Daily Sabah May 15, 2015 12:00 am
Dozens of students have been injured in clashes between groups linked to the far-right Nationalist Movement Party (MHP) and the pro-Kurdish Peoples' Democracy Party (HDP) at universities across the country, with security forces detaining scores to prevent fights from getting out of hand.

The frequency of the clashes have increased as the June 7 parliamentary elections approaches, with fights at Pamukkale University in Denizli and in Çanakkale late on Thursday injuring more than 10 people.

The clash at a cafe in Denizli was sparked when two groups, which were involved in previous altercations, began fighting, causing five injuries. The police detained three students that were seen as the primary instigators of the fight. MHP Denizli Provincial President Yasin Öztürt dismissed claims that the cause of the clash was political, accusing the other group of disturbing public order and efforts to incite violence. The second clash of the night was in Çanakkale and involved knives and bats. The police first dispersed the groups with pepper spray before detaining nine people, while three wounded were taken to nearby hospitals.

Similar incidents between university students have been occurring with increasing frequency in the last few weeks, with clashes at Eskişehir's Anadolu University on Tuesday after a HDP rally led to three students being injured. A fight on the same day at Gaziantep University in the southeastern province resulted in the police detaining 13 students. The police had to send reinforcements to disperse the crowds.
Last Update: May 15, 2015 11:12 pm
RELATED TOPICS