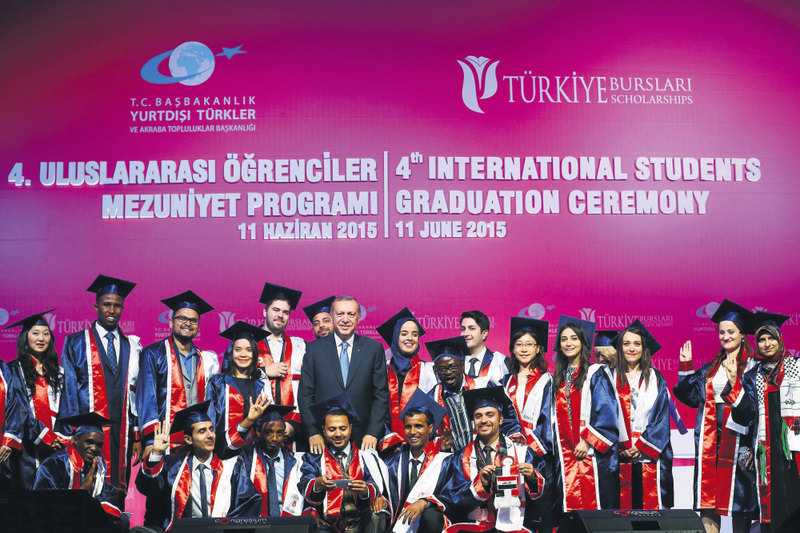 President Erdou011fan poses with foreign students at the graduation ceremony. Turkey is a hub for foreign students especially from Asian, African and Middle Eastern countries.
by Daily Sabah Jun 11, 2015 12:00 am

Turkey reaches out to the international community as part of its efforts to increase its soft power through a scholarship program catering to foreign students. Students from around the world who benefit from the scholarship celebrated their graduation in a ceremony Thursday

Thousands of foreign students graduating from Turkish universities celebrated their graduation in a ceremony on Thursday organized by Turkey Scholarship, an initiative of the government.

The ceremony in Ankara brought together 1,000 students who benefit from the scholarship program, as well as 3,000 others who were in Turkey to study.

The program is part of Turkey's soft power efforts to expand its clout over public diplomacy. Applicants hail from every part of the world, from Denmark to St. Kitts and Nevis islands. Medicine and engineering are among the most popular majors for foreign students along with international relations and economics. In addition to those who benefit from Turkey Scholarship, the country currently hosts some 60,000 students enrolled in Turkish universities.

The graduation ceremony in Ankara opened with a video screening depicting stories of foreign students benefiting from Turkey's Scholarships. The story of Jamil Mwaja, a student from Uganda, moved the audience to tears. Mwaja, hailing from a village in Uganda's Jinja, wanted to go to college but was unable to due to poverty. He applied for the scholarship when he came across an ad promoting the program. His initial application was approved but he was told that he would be sent an email with final confirmation. The excited young man said he prayed day and night for his application to be approved. He traveled to the city to find an Internet cafe so he could check if the email had come. His first trip was a six-hour journey by foot, and he was disappointed when he did not receive the email. When the journey proved daunting, he decided to ride a bicycle to the town but he did not know how to ride. Mwaja said in the video that he learned how to ride a bicycle so that he could check his email for the status of his application.

The Ugandan student was finally admitted to the Faculty of Business at a Turkish university. "I did not sleep during the eight-hour flight to Turkey because I was too excited," he said.

Mwaja appeared on stage before President Recep Tayyip Erdoğan made a speech and presented him with a Turkish flag as a gift.

Speaking at the ceremony, Erdoğan said the Turkey Scholarship program, which was established during his tenure as prime minister three years ago, succeeded in a short period of time to surpass expectations, and the number of applications rose to nearly 100,000 students from 8,000 over the past few years. Erdoğan said he viewed students as "honorary ambassadors" of Turkey in their countries. "We will keep our ties with each other strong," he said. He stressed that Turkey has a legacy of some of the world's oldest education institutions and strives to revive its function to serve students from around the world. He added that he was happy to see a number of students who graduated from universities in Turkey become high-ranking officials, such as ministers, in their countries.
Last Update: Jun 11, 2015 11:06 pm
RELATED TOPICS