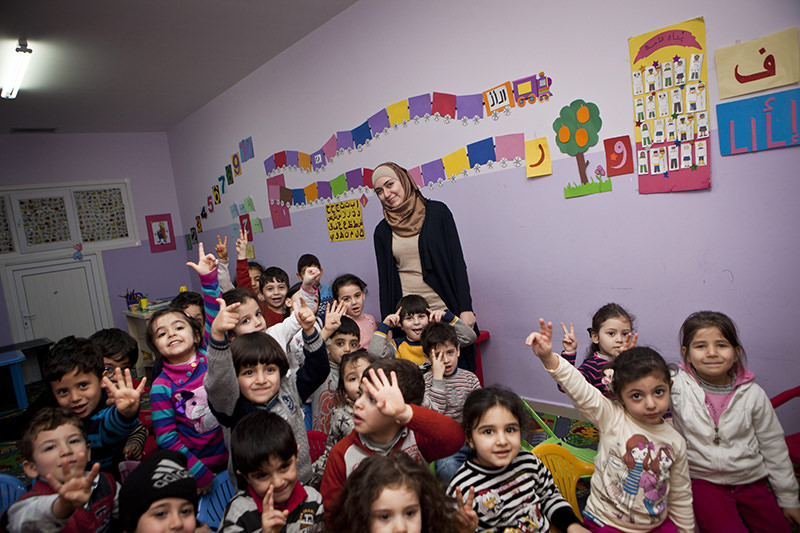 by Daily Sabah with AA Oct 27, 2015 12:00 am
About 260,000 Syrian children are registered as pupils in Turkey, out of which around 50,000 study at state schools, a senior Turkish Education Ministry official said Tuesday.

According to Turkish Education Ministry Deputy Undersecretary Yusuf Büyük, about 50,000 Syrian children "are being educated in our own [state] schools. We are increasing this number steadily".

However, the challenge of educating all Syrian children in Turkey remains. Büyük said that out of the 2.2 million Syrian refugees in Turkey, about 650,000 are children of school age, which means that about 390,000 Syrian children were out of schools.

Büyük also chaired an evaluation meeting dedicated to the Adana Action Plan, which was being carried out by the Turkish Education Ministry and the United Nations Children's Fund representatives in Turkey.

The action plan is being implemented in several Turkish provinces, including Adana, Gaziantep, Hatay, Kahramanmaraş, Kilis, Mardin, Mersin, Osmaniye and Şanlıurfa where the density of Syrian refugee population was high.

According to the action plan, Syrian voluntary teachers will be promoted and trained; educational materials will be distributed to Syrian children; new education centers will be built as well as functioning schools will be reconstructed and arranged to serve Syrian pupils.

In Hatay's Reyhanlı district, a shool offering intensive education to Syrian children refugees is managed via Skype. U.S. radio broadcaster NPR introduced the school, which is surviving thanks to donations from Canada and the U.S., as a success story in one of its recent broadcasts. On its social media platforms, UNICEF also described the school as one of the few intuitions that offer education to Syrian children refugees taking shelter in the region. Currently residing in Montreal, Syrian pharmacist Hazar el-Mahayni, 63, is the founder of the school.

The wars in Syria and many parts of Iraq have affected some 14 million children, according to a United Nations Children's Fund report published in March 2015. The children's body said that more than a million Syrian children were among refugees taking shelter in Turkey, and another million in Lebanon and Jordan. The organization said that some 2.6 million Syrian children remained out of school inside Syria as a result of the ongoing four-and-half years long civil war.

Turkey has welcomed Syrians since the beginning of the civil war in March 2011, hosting around two million people under temporary protection regulations, which provide for an unlimited stay, access to public medical health care and protection against forcible return.