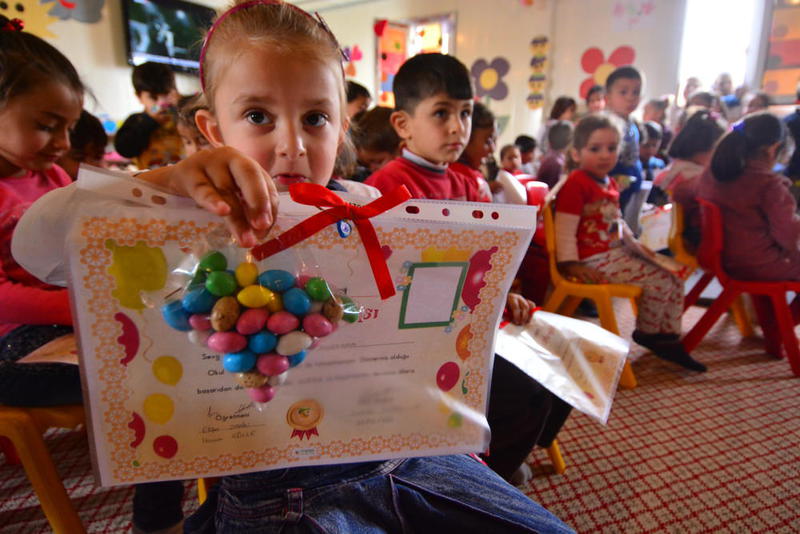 by Safure Cantürk Feb 02, 2016 12:00 am
Education remains a key way to help displaced Syrians whose lives have been shattered by the ongoing conflict in their country. As such, Turkey is preparing to allocate 1 billion euros it hopes to receive from the European Union to educate Syrian children, a senior bureaucrat has announced.

Turkey is home to more than 2.5 million Syrians, and nearly 8 billion euros have been spent on their care since they began taking shelter in the country five years ago. Moreover, they keep arriving in Turkey as the civil war in Syria worsens, leaving millions of people homeless. Children are among the most vulnerable of the refugees as civil war disrupts their education. Though Turkey struggles to offer education in refugee camps, access to education for those living outside the camps is limited to private schools run by charities.

With the new aid expected from the EU, Turkey will reach out to more school-aged Syrians. Turkey will announce the allocation of the educational funds at an upcoming summit in London regarding the Syrian crisis.

Speaking about the details of the education reform package, National Education Ministry Deputy Undersecretary Yusuf Büyük stressed that half of the Syrian children that have registered with authorities currently have access to education, noting that the ministry is working to extend education services to the remaining half - roughly 310,000 children - across the country. "We plan to have at least 450,000 children in total attending school by the end of this year. Some 75,000 children attend schools where they are taught our state curriculum under the guidance of Turkish teachers. We offer additional Turkish classes for them on weekends in our lifelong learning courses as well," Büyük said.

Büyük said 182 schools - run by the ministry in 19 cities where there is a dense population of Syrian refugees - are concentrating on educating Syrian youth. The total number of "educational centers" for Syrians is nearly 300. Some 9,500 Syrian teachers work at those schools, and - in the absence of work permits - the ministry pays a monthly allowance to these teachers. This may also change since Turkey introduced temporary work permits for refugees last month. Teachers, who work on a voluntary basis, will now be able to find regular jobs in Turkish schools. Büyük said the new regulation also paves the way for those teachers to work at imam-hatip schools, a type of middle and high school that offers a curriculum focused on teaching Arabic and theology.

As part of a deal with the EU that seeks to curb the refugee flow into Europe through Turkey, the country is anticipating the $3 billion in funding to improve the lives of the Syrians it hosts. EU Minister Volkan Bozkır said yesterday that the funds from the EU were scheduled to be allocated by March. EU funds will be used for the construction of new schools for Syrians. Büyük said they currently have enough resources to build 100 schools and that construction is scheduled to start this year. The National Education Ministry is also preparing to grant monthly payments to families with school-aged children. "This will potentially help reach out to some 50,000 children whose families have not allowed them to attend school," Büyük said. Turkey will also offer free transportation to Syrian students who live far from the schools.
RELATED TOPICS