More Syrians to learn Turkish with new project for refugees 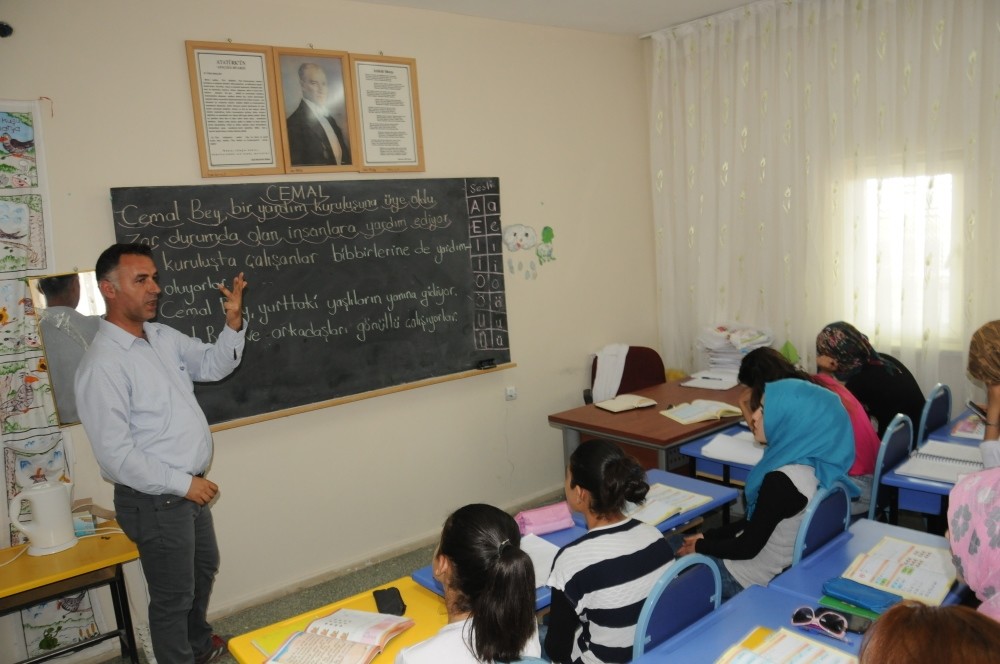 Syrian women attend Turkish language classes offered by the local education authority in the southeastern city of Batman. Turkey already offers language courses for Syrians, but they are mostly confined to children of school age.
by Daily Sabah with AA Jun 25, 2016 12:00 am

In a bid to help Syrians integrate into society, Ankara University launched courses in the city, Istanbul and border towns to teach the Turkish language to hundreds of refugees

Ankara University in the Turkish capital signed an agreement with an international development organization to teach the Turkish language to 1,200 Syrian refugees in Turkey.

Turkish Teaching Application and Research Center (TÖMER) of Ankara University, the leading organization in Turkey for teaching Turkish, will provide the Turkish education under an agreement with Sequa, an organization that controls funds supplied by Germany's Federal Ministry of Economic Cooperation and Development.

Professor Erkan İbiş, the president of Ankara University, said Turkey hosts nearly 3 million Syrian refugees and their main problem was "adapting to the society." "The primary challenge for Syrians is language, and I believe our university will provide a significant contribution to resolve this problem."

Aynur Kuytu, a Turkish representative of Sequa, said the project entitled Vocational Skill Building Through Turkish-German Cooperation (TAMEB) aims to help Syrians hosted in Turkey, and was the first of a series of educational projects catering to refugees.

Under the project, courses will be offered to Syrians above the age of 16 in Ankara, Istanbul and cities near the Syrian border which host a considerable number of refugees including Kilis, Mersin, Hatay and Şanlıurfa. The five-month courses will provide basic command of Turkish for Arabic-speaking Syrians.

Turkey is extolled by the international community for taking care of Syrian refugees, and is the largest recipient of the refugees in its region. Yet the developing country faces an immense financial burden of helping its "guests," as Ankara officially calls refugees. Turkey has spent more than $9 billion on refugees and called for the international community to boost funds for refugees.

Experts say although refugees are a financial burden, they may also pose an opportunity if they are integrated into society and the economy.

"With accurate, comprehensive and well-planned management of a long-term migration policy by Turkish authorities, Syrian refugees have the potential to have a positive effect on social and economic life in Turkey," Özlem Ekşi, an executive member of the Association for Human Rights and Solidarity for the Oppressed, told Anadolu Agency (AA).

Yusuf Ekinci, a sociologist at Yıldırım Beyazıt University in Ankara, said Syrian labor could prove to be an invaluable resource for Turkey's industrial and agricultural sectors.

In January, Turkey took steps to ensure that Syrians who have been in the country for six months could work legally. Ekinci warned that failing to integrate refugees into the workforce would mean they remain in unstable employment and are more likely to seek opportunities in Europe.

Turkey already offers education in Turkish for Syrians, but this is mostly limited to children of school age. Across Turkey's 81 provinces, more than 300,000 Syrian children have received Turkish language courses, according to the National Education Ministry, and another 150,000 are expected to receive formal education by the end of 2016.

Müberra Emin, an education expert at the Foundation for Political, Economic and Social Research (SETA), an Ankara-based think tank, told AA that Turkey had the opportunity to save a "lost generation" of Syrian children traumatized by war. "Turkey should not approach refugees as guests but as individuals who can be permanent citizens in the near future. The employment of Syrian refugees would integrate them into Turkey in peaceful and well-ordered conditions as well as prevent human trafficking to EU countries."

Emin called for the registration of education and work backgrounds of Syrians, so that they can be fully integrated into the workforce.
RELATED TOPICS