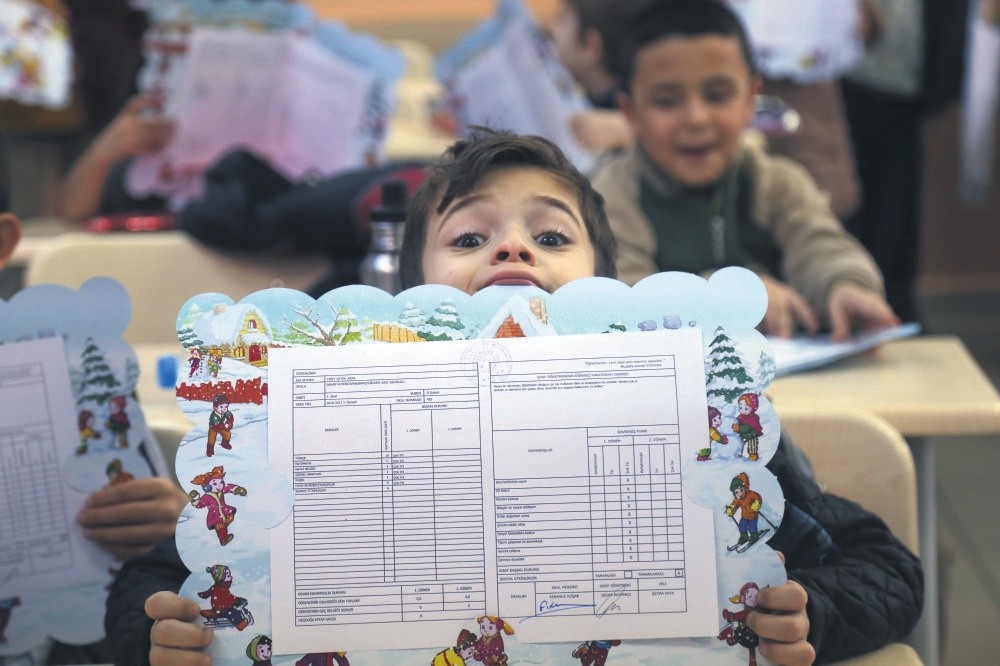 Students welcomed their long-awaited semester break yesterday after receiving reports showing their performance for the fall semester. Although the academic year is not over yet, new changes in the curriculum await millions of students

Some 18 million elementary, middle and high school students received their school reports and began enjoying their two-week semester break starting Friday afternoon. The reports, which show student performance for the first half of the academic year, began to be distributed early Friday morning. While some were happy and proud about their grades and success, some students were disappointed and determined to show more effort after the break, which marks the start of the new semester on Feb. 6.

However, this academic year has brought major changes to education as thousands of schools have been closed, and more than 28,000 teachers have been dismissed as part of an anti-terror campaign. To fill the void, authorities hired "unassigned" teachers who had to wait years for an appointment due to a surplus of teachers. Schools run by members of the Gülenist Terror Group (FETÖ) were handed over to the state and will continue serving as public schools, while students enrolled in those schools were transferred to public schools. Apart from these, the school year opened with a commemoration for those who lost their lives during the failed coup attempt on July 15, 2016, which was orchestrated by FETÖ.

On Friday, Minister of National Education İsmet Yılmaz visited the Ankara High School of Science, one of the leading high schools. Minister Yılmaz congratulated students as well as their teachers who teach and guide children for the future. He said the government has a huge education budget, as the foundation of development lies in education. "If we fund education more than health, this means that we give greater importance to education because if education is good, good health and economy will follow. Prior to 2002, the budget for education was less than 10 percent of the entire budget; however, today it is 20 percent of the government's budget. Yılmaz admitted that there are still drawbacks in the education system and added: "The governor of Ankara just informed me that Ankara needs 300 schools. There are nearly 70,000 preschool students in the province, and almost 40,000 of these students are enrolled in school, which means that at least 30,000 preschool students are in need of school. To meet that need, we plan to make preschool education compulsory throughout Turkey.

Minister Yılmaz stressed the importance of foreign language education and said students in Turkey should learn at least one foreign language. "They can learn English, German, French, Arabic or any official language of the United Nations. We believe that if we teach a foreign language to our students, their perspective on life and education improves," he added.

Although the academic year is not over yet, the Ministry of National Education (MEB) recently announced new changes to the curriculum that will make major changes in school subjects and the students' way of learning after this academic year. Ministry officials also reported that MEB would employ thousands of new teachers, equipped for the new curriculum. According to the new curriculum draft, some subjects were excluded, while some new subjects and content were added.

The first and most important change in the curriculum is the new subject of the July 15 coup attempt. Students in the sixth grade will learn about the coup attempt, the importance of democracy and those who lost their lives during the defense of democracy. The subject will be taught as a part of the "Social Sciences" lesson, and teachers will explain the military coups' effect on politics as well as social life.

Scientist Aziz Sancar, who won the Nobel Prize for Chemistry last year, and Kenan Sofuoğlu, one of world's top motorcyclists, will also have their place in the new curriculum. Sancar and Sofuoğlu, who made Turkey proud due to their international success, will be taught to middle school students as a part of "Contemporary Turkish and World History."

The subjects in philosophy lessons will be reduced. As the draft for the new curriculum suggests, the July 15 coup attempt will be taught as a part of "Contemporary Philosophy."

Perhaps the most exciting change in the curriculum is the newly added STEM, which refers to science, technology, engineering and mathematics and coding classes. Children will be able to take a close look at computer coding and learn the basics of engineering right from the beginning.

The draft for the new curriculum can be viewed online at the ministry's official website. Previously, Yılmaz encouraged teachers, students and parents to comment on the draft and share their advice to make the draft more efficient. The draft will remain online until Feb. 10.
RELATED TOPICS