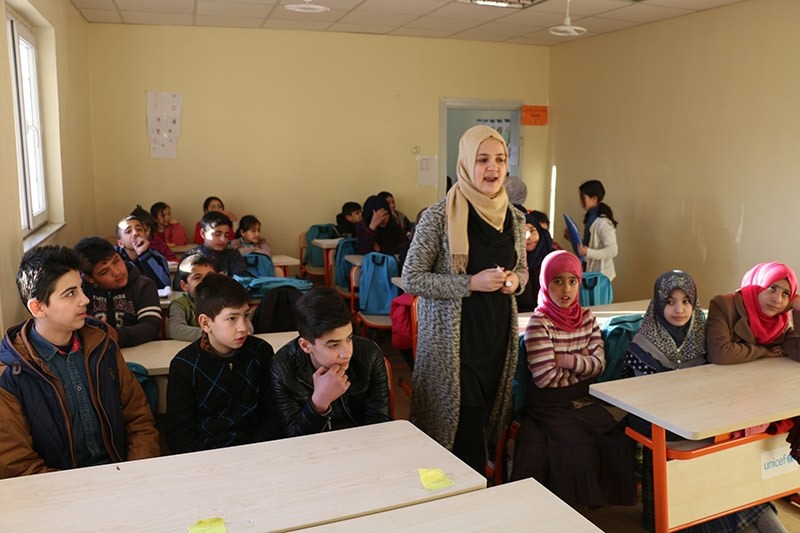 After fleeing civil war and violence in their country, 120 Syrian students have continued their education through intensive Turkish courses in the southeastern city of Siirt, and many are now passing on their new language skills to their families.

Siirt schools affiliated with the Ministry of National Education (MEB), along with the 14 September Provisional Training Center have put together the "Project for the Integration of Syrian Students into the Turkish Education System."

Center coordinator, Mehmet Faruk Süzgün, explained that 12 teachers had been assigned by MEB to teach Turkish to the Syrian schoolchildren using a 'Turkish as a second language' teaching method.

Süzgün stated that the Syrian students have been receiving the intensive Turkish education for about one month and that they were progressing quickly.

"Thanks to our 12 Turkish teachers, our students have started to learn Turkish very well and quickly. The students who learn Turkish no longer feel like strangers in the public schools they attend," he said.

Süzgün noted that some of the students have begun transferring their knowledge to their families. "Both the students and the parents are very happy with this program," he added.

Hammud Elmatar, Syrian director of the Center, said that the secret to teaching the Turkish language is the intensive nature of the course. Teachers are able to pack a lot of grammar and exercises into the 15 hours a week of classes.

One student, Hamza Alhamad, learned Turkish very quickly by taking the intensive course, and shared his knowledge with his family. "When I go home, I read Turkish books with my family. Now they have also learnt Turkish."

Alhamad explained that before the intensive course was offered at the center, other Turkish courses were insufficient. "We could not learn Turkish because the lessons were much shorter. Now we are learning much better because the teachers give us 15 hours of lessons a week."

Starting from 2011, Turkey has taken in some 3 million Syrian refugees, more than any other country in the world. About one third of them reside in the southeastern provinces of Gaziantep, Diyarbakır, Şanlıurfa, Batman, Adıyaman, Siirt, Mardin, Kilis and Şırnak.