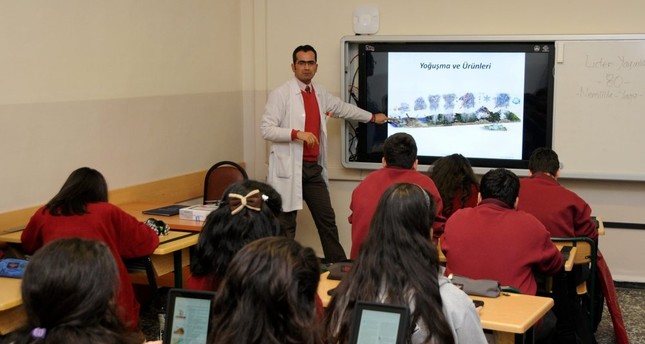 Students use their tablet computers in a classroom with a smart board at a Turkish-Armenian high school in Istanbul, one of the first places were tablets were delivered in the project's test phase.

As Turkey expands its FATİH project, the drive for ‘smart classes' is underway with the delivery of 2.5 million more tablet computers for seventh and ninth graders in the coming months

Turkey's bid to connect students continues as part of its ambitious FATİH project with the delivery of 2.5 million more tablet computers for seventh and ninth graders across the nation.

The tablet computers will be delivered before the start of the next school year, which is scheduled to start in September.

FATİH means 'conqueror' in Turkish, but it is also an acronym for Fırsatları Artırma ve Teknolojiyi İyileştirme Hareketi (Movement to Increase Opportunities and Technology).

As part of the project first launched in 2012, students using tablets are able to interact with what their teachers write on smart blackboards in classrooms.

The project aims to make learning fun and lessons more comprehensive, thanks to online accessibility.

The government aims to deliver 10 million tablets to students and teachers by 2020 and so far, about 1.4 million tablet computers have been delivered.

Produced locally, the tablets have 2 GB of RAM and 32 GB of internal memory. They boast a 10.1-inch high-resolution screen, Wi-Fi connectivity and a camera. They also come with educational apps pre-installed.

School authorities announced last year that the next generation of computers will feature 4.5G mobile internet.

The FATİH Project is focused on equality of opportunities and effective learning in education. One of the goals of the project is to set up smart boards (interactive white boards) and increase internet infrastructure-readiness.

The project will see the distribution of multifunctional cameras and photocopiers, as well as PCs and tablets for each teacher and student from fifth grade up to the 12th grade, producing web-based content.

There will be a quota for data transfer and students will only be able to visit websites approved by the National Education Ministry.

Authorities will also deliver 298,000 more smart boards to classrooms, adding up to a total of 432,288 across schools in Turkey.

The Ministry of Education is also working on adding more content to the Education Information Network (EBA), an education portal both for students and teachers that offers more than 150,000 pieces of digital educational content, ranging from e-books and audio books to games, dictionaries and magazines.

Turkey's education system has undergone a number of major changes since the Justice and Development Party (AK Party) took power in 2003.

Most significantly, university entrance exams have undergone a series of changes. The government plans to remove the exam entirely and implement a performance assessment system.

Under the new system, university applicants will be evaluated based on their skills and achievements in extracurricular activities. At the same time, prep schools have also been also shut down.

Turkey's education system faced criticism in the past, particularly over the low number of schools available to accommodate an ever-growing number of students.

With an increase in the number of schools in recent years, images of crammed classrooms have disappeared, although underdeveloped regions in remote parts of Turkey still suffer from an insufficient number of teachers.