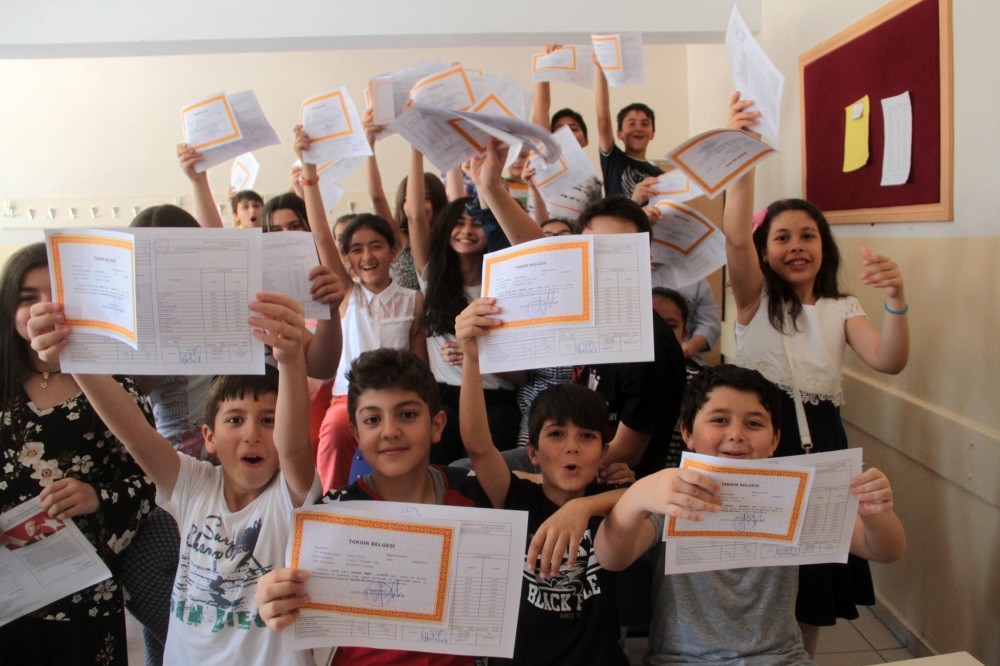 A three-month summer vacation began for more than 17 million students and 1.2 million teachers started Friday, following ceremonies where they were handed the traditional report cards

The most anticipated day of the year for students hungry for high grades and a long vacation was on Friday. A total of 17.5 million students and 1.2 million teachers welcomed the three-month school break with ceremonies, parties and the tradition of the delivery of report cards.

Prime Minister Binali Yıldırım shared the joy of students at a ceremony marking the end of the school year, at a middle school in the capital city Ankara. Yıldırım outlined new reforms in education in a speech to the students. He said the school hours would be reduced to a single shift by 2019 and instead of two shifts - between morning and afternoon and afternoon and evening - students would go to school between the morning hours and the late afternoon.

The prime minister said they would also build more classrooms to reduce the number of crowded classrooms, a chronic problem in the country where the number of schools increased only in the past decade. He noted that the government considerably increased its education budget and for 2017, it constituted 20 percent of the total budget expenditures.

"We built 27,000 new schools in the past 15 years and employed 561,000 more teachers in the same period," Yıldırım said, referring to the period that the ruling Justice and Development Party (AK Party) governed the country. He said they are now working to update the curriculum and an entirely new curriculum will be introduced gradually to first, fifth and ninth graders in the next school year.

The end of the school year was also an exciting occasion for Syrian students who had to drop out of school in their countries before they fled into Turkey with their families over the past six years of the Syrian civil war. Students staying at refugee camps in Adıyaman, Kilis, Şanlıurfa and other cities near the Syrian border received their report cards and gifts from their Turkish hosts in ceremonies on Friday. Children make up a substantial portion of the refugee population that fled their devastated country for Turkey, Lebanon and Jordan and are among the most vulnerable. Experts consider education the key to saving this "lost generation" from a bleak future, yet most refugees are forced to skip school; either compelled to earn a living for their families or due to difficulties in adapting to life in their new host countries. According to the latest figures, a total of 169,010 Syrian children attend Turkish public schools under the Temporary Protection Regulation, while 294,112 Syrian students go to special temporary schooling centers.

For those with low grades, the end of second semester means a dressing-down and in some extreme cases, corporal punishment from parents. In families with a history of domestic violence, the fear of being beaten at the hands of violent parents pushes some students to suicide. Psychiatrists warn parents against strict punishment of children due to poor grades. They urge parents to take a balanced approach toward report cards, neither rewarding nor punishing excessively for high or low grades. They also suggest spending more time with children during the summer break.