Thousands of Syrian refugees back in school through Turkey's efforts 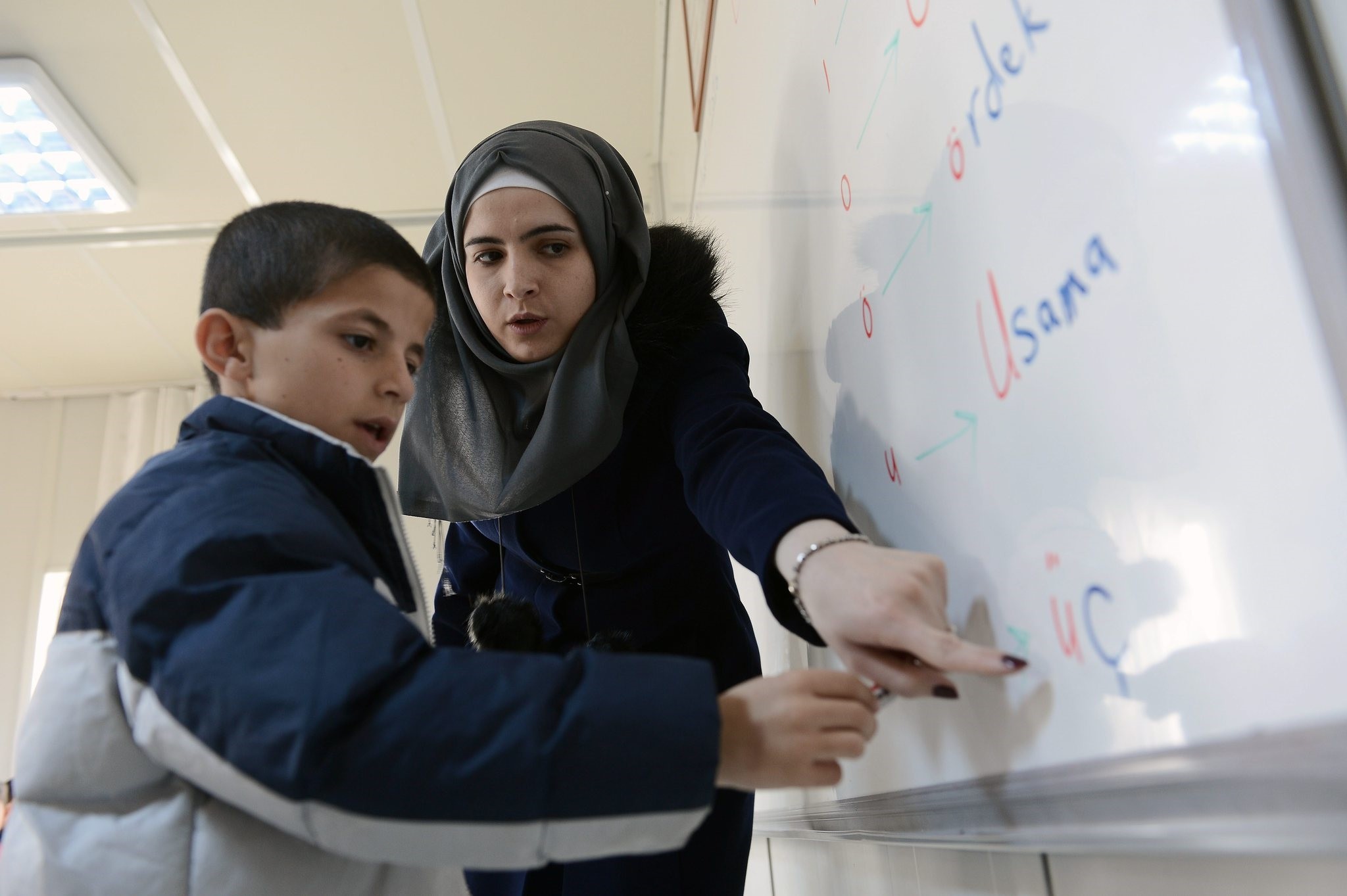 A Syrian teacher with a Syrian student at a school inside a refugee camp in the eastern city of Malatya.
by daily sabah
May 24, 2018 12:00 am

According to Turkish authorities, the school enrolment rate for Syrian refugee children in Turkey has reached nearly 63 percent, a success amid focused efforts to prevent a generation of Syrians from going uneducated

The school enrolment rate among Syrian refugee children in Turkey has reached nearly 63 percent, thanks to the efforts of Turkey and the international community. Minister of National Education İsmet Yılmaz said that some 611,524 out of a total 976,200 school-age Syrian children have enrolled at schools in Turkey. Yılmaz was speaking at a protocol-signing ceremony in the capital Ankara, where the European Union agreed to provide 160 million euros to build 60 schools for Syrian children.

"Once complete, there will be 215 schools built specially for [Syrian children]. These schools will have the capacity to accommodate 153,000 students," the minister said.

Turkey already accepts Syrian students in public schools but the language barrier and different curriculum have proven to be an obstacle.

Yılmaz, however, said that they have come a long way on the language issue. "Some 384,292 students now attend classes that follow a Turkish curriculum, compared to only 62,000 in 2016. Apart from public schools, 227,232 students attend "temporary education centers" in 21 Turkish cities with a large presence of Syrian refugees.

Yılmaz said that they have reached their goal of having all children in school only for grade schools whiles schooling rate remains low among preschool and high school students.

"We need better infrastructure to boost the enrolment rate," the minister pointed out, referring to the need for more schools, staff and equipment.

To speed things up, some schools will be made using prefabricated units, in the fashion of some refugee camps built in Turkish border cities. "We see them as 'saved' when they are integrated into the education system. Education is a basic human right," the minister said.

Speaking at the protocol-signing ceremony, Christian Berger, head of EU delegation to Turkey, said they had to relieve Turkey's schools of the burden posed by the increasing enrolment rate among Syrians.

"Neither Turkey nor the EU can let the emergence of a lost generation among Syrian children," Berger said, that these children would be the ones who would rebuild Syria in the future. He noted that the EU would also provide support for education material, the teaching of Turkish and Arabic, as well as psycho-social support services. EU funds will also provide scholarships to Syrian students, Berger said.

Education is a major concern for Turkey which eyes better integration of refugees as there is no end in sight to the Syrian conflict. Amid mass displacement and attacks, most Syrians are forced to drop out of school, joining the so-called "lost generation" of refugees without proper education.

Experts warn that the lack of education spells trouble for refugees in the future and lessens their chance to escape economic dependence.