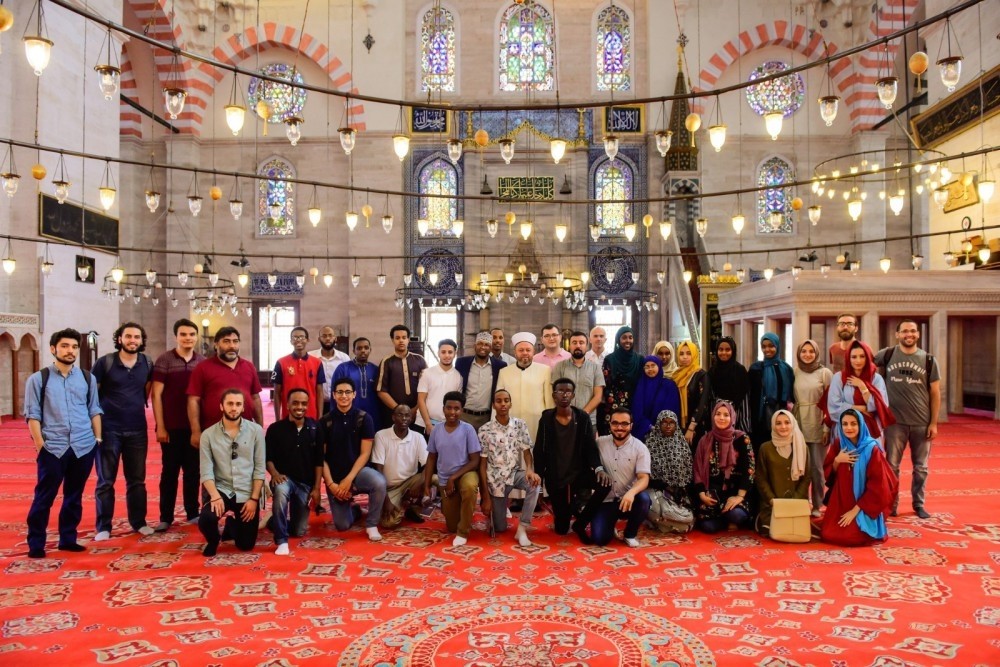 Somali-American guests toured mosques and landmarks in Turkey.
by Deniz Renkveren Sep 01, 2018 12:00 am

The state-run Yunus Emre Institute is hosting East African-American Muslim students who are mostly Somali-Americans and NGO representatives from Minnesota, in Turkey in a bid to promote Muslim and Turkish culture and cultural diversity in the country

The Yunus Emre Institute (YEE) is carrying out an important project that reinforces Turkey's function as being a bridge between East and West. Representing Turkish culture and language all over the world, the state-run YEE is organizing a tour in Istanbul, Bursa and Ankara for approximately 20 East African, mostly Somali-American students in high school and university along with representatives of nongovernmental organizations (NGOs) from Minnesota, between Aug. 27 and Sept. 4. Supported by the Istanbul Metropolitan Municipality and Touring and Automobile Club of Turkey (TURİNG), the aim of this program is to improve their self-confidence and their self-identity as American Muslims.

"I FEEL CLOSER TO ISLAM"Sharif Abdirahman Mohamed, a Somali-American imam and chaplain, said he spent a short time in Turkey and the hospitality of the Turkish people and the rich and proud history of the Turkish nation has become an inspiration for him and his students: "The calls to prayer and the beautiful mosques are an inspiration and call us closer to our faith. Many of the travelers we have brought have never heard a public call to prayer, they have not experienced a nation that is majority Muslim. Our travelers benefit from a greater sense of pride in their faith and heritage, they are better able to face tough situations of Islamophobia or isolation," he said.

Eighteen-year-old high school student Abdirahman Salad was fascinated by the level of development in Turkey. "It is refreshing to see a Muslim culture that is this well-developed."

Imam Mohamed said that he was surprised by the powerful economy and growth of the nation. "Their system of education and healthcare systems are clearly a source of pride for the Turkish people."

Dr. Michael Van Keulen, Executive Director of Minnesota-based non-profit Open Path Resources highlighted that Muslim youth in the U.S. should experience an environment where being Muslim is an obvious source of confidence and where they understand what it is like to join a diverse community with self-respect and respect for others: "Turkey offers an environment that has in its soul a deep faith as well as a confidence that a diverse society is a benefit and does not need to diminish or isolate any one group of people. Its heritage has been openly shared with us and is a gift to our youth." Talking about Turkish culture, Van Keulen said, "They are generous, joyful, open in their hearts and thoughts. We have traveled to Turkey to explore our faith and how that faith is confidently lived in a culturally and religiously diverse society. We have found that model among the Turkish people."

"HOSPITALITY EXISTS IN ‘THE DNA' OF TURKS"Imam Mohamed said that as rooted from Islam, Turkish culture allows faith to be alive and active in a modern, secular world. "The culture emphasizes a peaceful coexistence and a value for the diversity of its people, all while respecting the importance of Islamic principles to serve as a guide."

He pointed out the welcoming face of Turkey: "The peacefulness and acceptance of strangers seems to be in the DNA of the Turkish people. We recognize the incredible efforts Turkey has made for the hundreds of thousands of refugees and we don't believe there is another nation in the world that has provided as much to the benefit of those in need."

Nineteen-year-old high school student Aisha Abdi stressed the freedom in Turkey, "They are so nice and kind. In the streets people look at you but not in a rude way. Nobody cares that I wear a hijab. They look at me, not my way of dressing." Ibrahim agrees with Abdi: "The people are so nice and easy to talk to. They have tried so hard to help me understand even though I don't speak Turkish."

CEO of National Youth Leadership Council (NYLC), Amy Meuers talks about the peaceful image of Turkey, "Turkey is a place where East meets West. It is a majority Muslim country that is also secular. With so many powerful identities coming together in this one place, Turkey has the opportunity to show the world how to be a leader in conflict resolution." She say even though she is not Muslim, the first time she heard the call to prayer it was so powerful. She emphasized that Turkey is a safe country: "The government in the U.S. implies that Turkey is not a safe country for travel. My family was nervous for me to come on this trip but I knew it was an opportunity of a lifetime, and I was right."

Ibrahim said that her mom really likes Erdoğan who helped the Somali people for so many years. "I feel like he is someone who shows how leaders should lead, he is an example of what Muslim leaders can be," she says.

Van Keulen said that Erdogan is held in high regard for his efforts to bring an end to the suffering in Somali: "He has been more than words or simple acts, he has been a person of leadership and action. Care for those suffering, sustaining his care for the Somali people shows that Islam and the leaders in the Muslim world are for peace, caring, and hope. We encourage the Turkish people to feel pride in their nation's vision for an inclusive and hopeful world." He added that the Somali immigrant population in Minnesota had a unique love for Turkey: "When you ask about the Turkish people of the U.S., you must also include the Somali-American people who very proudly say that they too, are Turkish people."

Van Keulen emphasized the YEE'S peaceful mission: "YEE has been a true gift and sincere partner for people all around the world. YEE has shown a commitment to bringing youth together, focused upon each child's healthy development. They connect our youth to a belief in the human family and give us hope that the tensions, misunderstandings, and fears common to international discussions are temporary. We think that YEE is one of the most powerful and loving faces of Turkey, we encourage all of Turkey to take great pride in the work of this organization, it is both effective and very special."

Van Keulen said that institutions like YEE are one of the most important solutions to political problems and crises: "Connecting youth, sharing our stories and celebrating the cultural identity of each will transform our future into one where fear and lies cannot overcome what is more true, we are best when we know and trust one another. The gains made from manipulation of people are never greater than those made by the celebration of our shared potential. I believe that through leadership of institutions and the people of Yunus Emre, we will come to know and love one another."

The institute, named for the famous Turkish poet who lived from 1238 to 1320, has taught Turkish to thousands of people and reached out to more with their Turkish cultural activities abroad since it was founded in 2009. A flagship organization promoting Turkish culture and language abroad, the institute has 56 offices in 46 countries.

Turkey enjoys close ties with Somalia after President Recep Tayyip Erdoğan's landmark visit to the African country in 2011 as the first non-African leader to visit the war-ravaged nation in 20 years. Ankara pioneers aid efforts for Somalia and helps development efforts in the country.