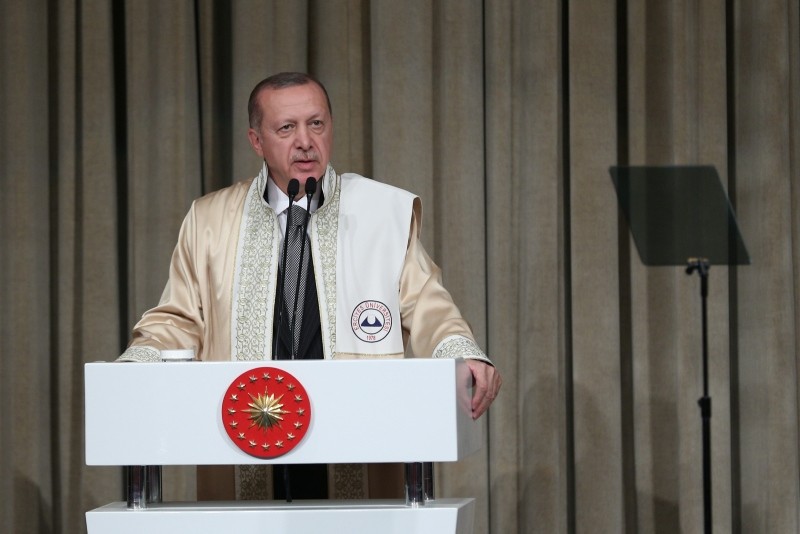 "There is a place in our universities for any view, no matter how rigid they are, as long as they are not involved in violence and do not bless terrorism," Erdoğan told a ceremony ushering in the new school year at Erciyes University in the central Kayseri province.

Erdoğan said over the last 16 years Turkey has taken major steps not only in the areas of the economy, health, and infrastructure, but also in liberalizing universities.

"We know very well that Turkish universities are enjoying the most liberal, independent, and powerful era in their history," he added.

Erdoğan said no civilized country can allow terrorism to take root at universities, adding: "Because spreading terrorist propaganda cannot be considered freedom of thought in any democratic country in the world."

He added that Turkey places importance on reflecting social differentiation at universities since they have to carry a universal identity.

Erdoğan also stressed Turkey's role as a country which is able to step into regional issues such as the Syrian civil war and Iraq.

"Today Turkey is a country which intervenes in regional problems such as Syria and Iraq, and can apply all types of necessary measures for the continuity of the state," Erdoğan said.

Turkey is sitting at the table and has taken the field in international issues, he said.

"This effort can't be maintained by leaving the table or the field to someone else," Erdoğan said, adding that Turkey is always aiming higher.

Turkey has carried out two major cross-border operations into Syria since 2016 -- Operation Euphrates Shield and Operation Olive Branch -- meant to rid border areas of terrorist groups such as the PKK/PYD which threaten both Turkey and the local population.

To help Syrian civilians, it has also championed initiatives such as de-escalation zones while sending humanitarian aid and urging an end to offensives which target these civilians.

In cross-border strikes into northern Iraq, Turkish forces have sought to eliminate hideouts of the PKK, a terrorist group which has taken some 40,000 lives in Turkey, including women and children.