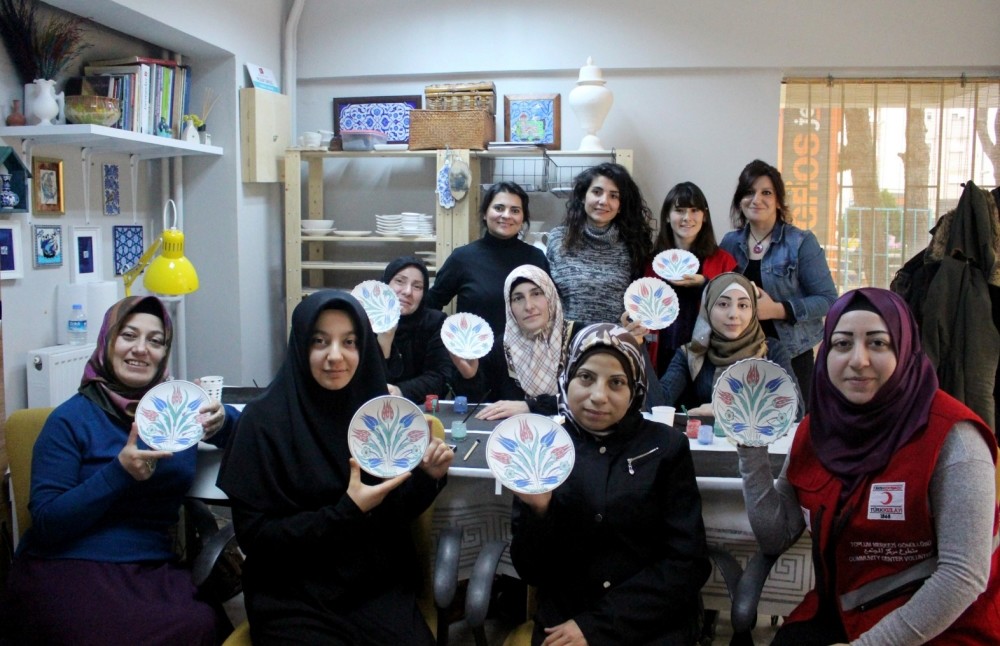 Syrian and Turkish women at the community center pose at a class of plate painting.
by Daily Sabah Jan 03, 2019 12:00 am

Lifelong learning classes, language education and social events organized by the Turkish Red Crescent in Istanbul offer Syrian refugees an opportunity to experience normal life in a country where they took shelter, as well as a chance to socialize with their Turkish neighbors

A community center in Istanbul's Sultanbeyli district, which has been called "Little Syria" for its large population of Syrian refugees who fled the ongoing war in their country, helps them to socialize with the local people and learn new skills.

Set up by Turkish Red Crescent, the leading charity in efforts to improve lives of refugees, the center provides lifelong learning, Turkish classes and social events for refugees of all ages. The Syrian refugee population in Turkey exceeded 3.5 million in the eighth year of conflict in the country's southern neighbor Syria. There is no end in sight for the war, pushing refugees to ponder a longer stay than they planned and leaving Turkey scrambling for their better integration.

Arif Muştu, a Red Crescent official who runs the program at the Sultanbeyli community center, said they started opening such centers in 2015 both to cater to locals and refugees. A similar center serves in Şanlıurfa, a border city with a large Syrian refugee population, while another is located in Bağcılar, another Istanbul district popular among refugees. "We have 15 centers in 14 cities, and our doors are open for anyone, be they men, women, Turks, refugees, children, youth or disabled," Muştu told Anadolu Agency (AA). He adds that the centers aim to boost social integration of refugees with locals. They provide lifelong learning classes from sewing to computer literacy, from hairdressing to Turkish language classes. Centers also offer psychosocial support for refugees. Locals and refugees together attend seminars and other social and cultural events at the center to help bring them closer.

Some 3,000 people participated in 30 lifelong learning classes launched since 2015, helping them to find jobs. Since 2016, Syrians are being given work permits in Turkey. Community centers cooperate with İŞKUR, the state-run employment agency, to find jobs for refugees with work permits.

Centers employ professional teachers, and university students volunteer for work. Zeynep Piroğlu, who works at the Sultanbeyli community center as a social event planner, says they offer everything to refugees from sports and education to vocational training and take them on field trips and give them psychiatric support. "Turks also attend these centers, and we bring them together with Syrian refugees so they can communicate better with each other and learn about each other's culture," Piroğlu told AA. She says children are among the main beneficiaries of the centers, and they helped educate some 1,250 children in the past two years.

The population of Syrians living in Turkey may increase to 5 million in 10 years, a recent report by the state-run Ombudsman Institution indicates, drawing attention to the fact that even though the war may end in Syria, many Syrians in Turkey could decide not to return home. Stressing that Syrians are living in every province and district across the country, the report clarified that the percentage living in camps has decreased to 6.69 percent, while some Syrians have become Turkish citizens. "Some have started to work and invest in Turkey. In light of this situation, it is not realistic to only produce policies as if they were leaving tomorrow. If Syrians feel safe in Turkey, even if their earnings are low but they have jobs, have a decent place to live and have schools where they can send their children, it will be difficult for them to go back to Syria even if the war is over," the report added.