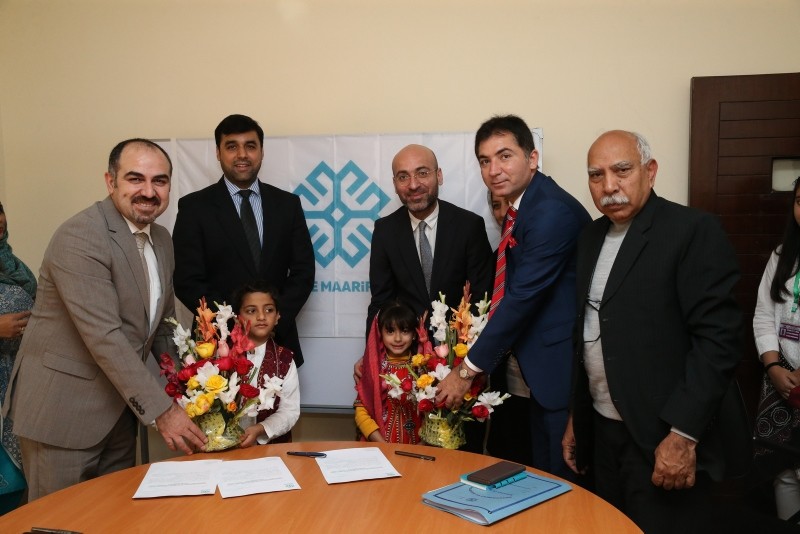 Pakistani and Maarif Foundation officials after signing the documents which marked the official handing over of FETu00d6-linked schools to Turkey, Jan. 16, 2018. (AA Photo)
by Anadolu Agency Jan 16, 2019 12:00 am

The handing-over ceremony was held Wednesday at the main branch of Pak-Turk Maarif International Schools and Colleges — formerly known as Pak-Turk schools — in Gulshan-e-Iqbal neighborhood of the city.

Mahmut Özdil, board member of the Maarif Foundation, and an official of the government of southern Sindh province of which Karachi is the capital, signed the documents which marked the official handing over of the schools.

Earlier, the delegation along with Turkish Consul General Tolga Uçak met Sindh Home Secretary Qazi Kabir at the latter's office. The consul general and the foundation members thanked the provincial government of Sindh for handing over the schools.

The foundation has already taken control of FETÖ-linked schools in capital Islamabad and the second-largest city Lahore.

Last month, the Supreme Court of Pakistan ordered the government to declare FETÖ a terrorist group and to ban its affiliated schools in the country.

FETÖ and its U.S.-based leader Fetullah Gülen orchestrated the defeated coup of July 15, 2016 in Turkey, which left 251 people killed and nearly 2,200 injured.

Turkey established the Maarif Foundation in 2016 after a coup attempt to take over the administration of overseas schools linked to FETÖ. It also establishes schools and education centers abroad.

FETÖ has a considerable presence abroad, including private schools which serve as a revenue stream for the terror group.