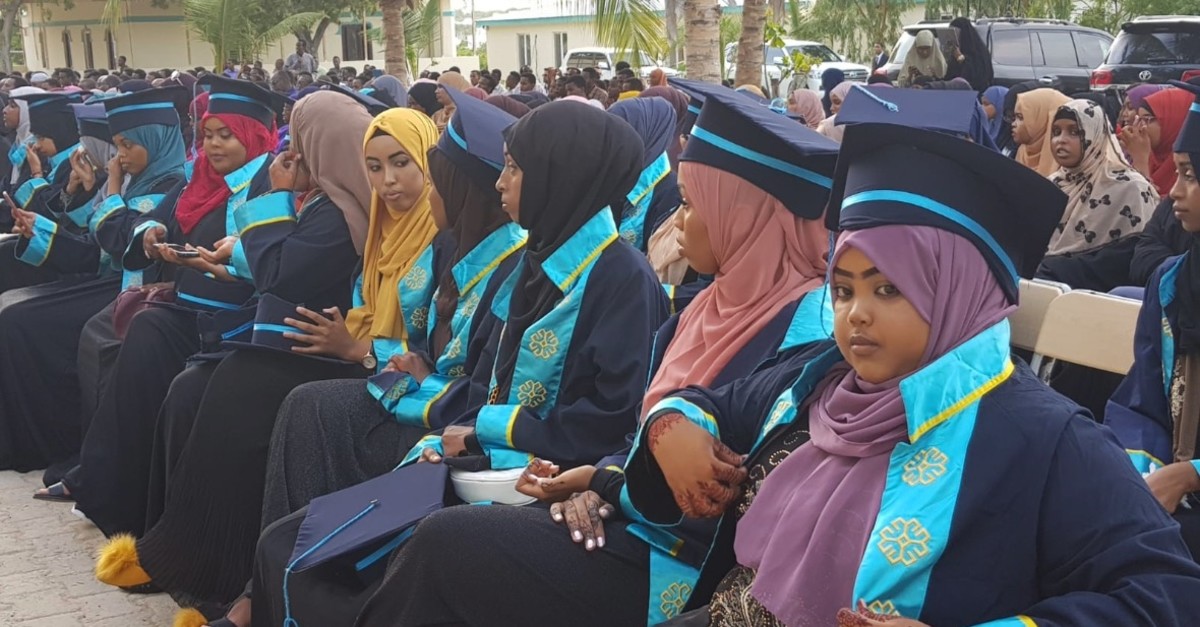 Some 104 new graduates from Somalia's Mogadishu Maarif Schools, run by the eponymous Turkish foundation, received their diplomas in a graduation ceremony yesterday. The students graduated from the first schools opened abroad by Turkey's Maarif Foundation.

Speaking at the graduation ceremony, Jabiri said he believed that young people, who were provided with a high level of education at Maarif schools, would do their best for their country. He also praised Turkey's efforts in Somalia. "Turkey offers education opportunities for a large number of Somalian students. As the state of Somalia, we would like to thank Turkey, the Turkish nation for its heartfelt, meaningful service to Somalia," Jabiri said, referring to Somalian students benefiting from Turkish scholarships every year.

Mehmet Yılmaz, the Turkish ambassador in Mogadishu, said Turkey has always been devoted to Somalia and it was a student of Maarif schools in Somalia who presented the April 23 Children's Day festival at the Beştepe Presidential Complex in Turkey this year.

Associate professor Cihad Demirli, a member of the Maarif Foundation board, said Turkey and Somalia had intense cooperation on education and in other fields and pledged more services for Somalia. "We will enrich our campuses here with activities integrating them more with local people. We also work on opening a vocational school at the KM4 campus," Demirli said, adding that they wanted to be members of 'a growing family.'"

Along with Jabiri, Yılmaz and Demirli, Turkish diplomats in the African country as well as the director of a Turkish-built hospital, the head of Turkey's development aid agency TİKA's Somalia office and the director of Turkey's Yunus Emre Institute in Somalia, attended the graduation ceremony. Students graduated with honors made speeches in Turkish and were awarded at the ceremony. Students, their families and officials later attended an iftar (fast-breaking meal) at the Yunus Emre Institute.

The foundation was created in cooperation with the Ministry of National Education with the purpose of providing educational services abroad, now runs schools that used to belong to FETÖ in the past. Since its establishment in 2016, shortly after FETÖ tried to seize power in Turkey, the foundation has made official contact with 90 countries and set up offices in several countries to take over FETÖ-linked schools. It currently runs more than 160 schools in 12 countries, including Niger, Chad, Somalia and Sudan. At least 94 FETÖ-linked schools, with more than 10,000 students, have been transferred to the Maarif Foundation with the help of the governments of the respective countries.

FETÖ is known for running a global network of schools and companies and long disguised itself as an education charity with religious undertones under the name of the Hizmet (Service) movement before it employed its military infiltrators for a bloody coup attempt on July 15, 2016.