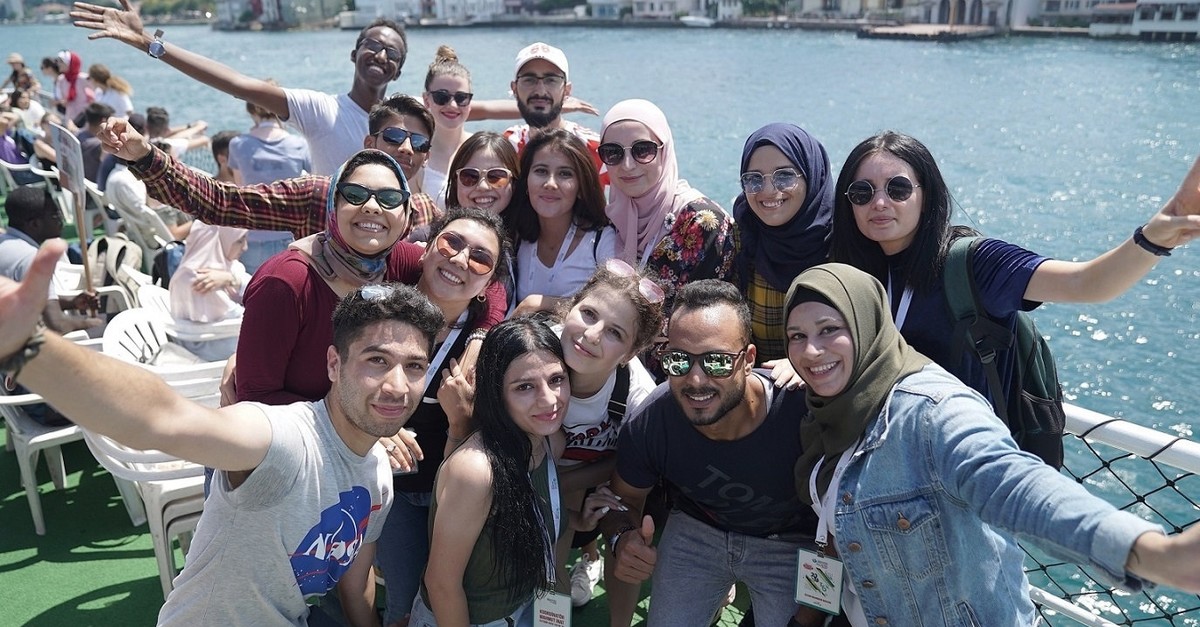 Foreign students who took the Turkish Summer School program of the Yunus Emre Institute in 2018 summer pose for a photo in Istanbul.
by Daily Sabah with AA Jun 07, 2019 12:12 am

The Yunus Emre Institute, the state-run agency that promotes Turkish language and culture around the globe, marks its 10th year with its ever-growing network of language courses and a wide range of activities promoting everything Turkish

Started 10 years ago as a small state-run agency to promote Turkish language and culture, the Yunus Emre Institute is now a globe-spanning entity endearing thousands to everything about Turkey. With 157 offices on five continents, the institute has helped teach Turkish to 144,000 people. It is also behind hundreds of activities concerning music, art exhibitions, literature, language, gastronomy, cinema and handicrafts to boost Turkey's cultural ties with other countries.

The institute was part of Turkey's efforts to strengthen its "soft power" or as its leaders call it, reaching out to countries with historic and cultural ties, uniting with other countries through cultural bonds while making the country more visible in the international community. The country, through a revived developmental aid agency and a foundation to set up international schools across the world, has been influential on the international scene by reaching out to disadvantaged communities as well as renewing ties with countries it maintained relations with dating back centuries.

Named after the 13th-century poet Yunus Emre, an influential figure that spread a purer version of early Turkish, the institute also adopted his embracing philosophy "Let's Know Each Other," a verse from one of his well-known poems. Since it was established in 2009, it has striven to make Turkish culture and language better known in many parts of the world amid a growing interest in Turkey in the last decade.

In Turkish Culture Centers from Asia to Africa, it teaches Turkish to everyone from young students to adults. Along with standard Turkish language courses, it offers specialized classes like Business Turkish, Turkish for Children, Literary Translation and Turkish Used in Media. It also runs a series of other activities like an online Turkish teaching portal, Turkish summer school and a Turkish proficiency test. This has helped teach some 75,000 students Turkish. This number reaches about 144,000 when the institute's other activities like Turkish classes provided outside culture centers and contributions to designate the Turkish language as a selective course in schools abroad. Some 218,000 hopefuls from 194 countries also take online Turkish classes on Yunus Emre's learnturkish.com website. Its Turkish teaching efforts are not confined to other countries, and the institute hosted 3,755 students from more than 130 countries in Turkey for Turkish Summer School where students are able both to learn Turkish and immerse themselves in Turkish culture.

The institute is also behind a large number of projects and activities to promote the country and its culture. The Archer (Kemankeş) Project, for instance, reaches out to foreigners looking to learn about traditional Turkish archery. Yunus Emre either trains archery trainers from various countries in Turkey or offers brief archery classes in other countries under the project. Similarly, traditional Turkish handicrafts are introduced in other countries through another project. The institute also screens Turkish films and promotes Turkish music and performing arts with the Colors of Anatolia project.

Turkey Week is a culmination of promotional efforts by the institute and tours other countries. It started this year in Zagreb and Bucharest with the theme Göbeklitepe, one of the oldest sites of archaeological ruins located in present-day Turkey's southeast and will continue with events in Russia, Albania, Spain, Serbia, Tunisia and Lebanon. The week includes photo exhibitions, conferences, concerts, ceramic workshops and panels.

Investing in its future as the flagship agency of Turkish culture promotion, the Yunus Emre Institute also launched the Cultural Diplomacy Academy that trains the future cultural envoys of the country. The academy hosts diplomats, prominent academics, artists and activists for training in cultural diplomacy.

Most recently, it established the Academic and Scientific Cooperation Project of Turkey (TABİP) to introduce Turkey-based academics and their scientific studies to the world. In another project, Turkology, the institute signed protocols with 96 universities from 49 countries for studies in the field.