Literacy classes change the lives of thousands of Turkish women 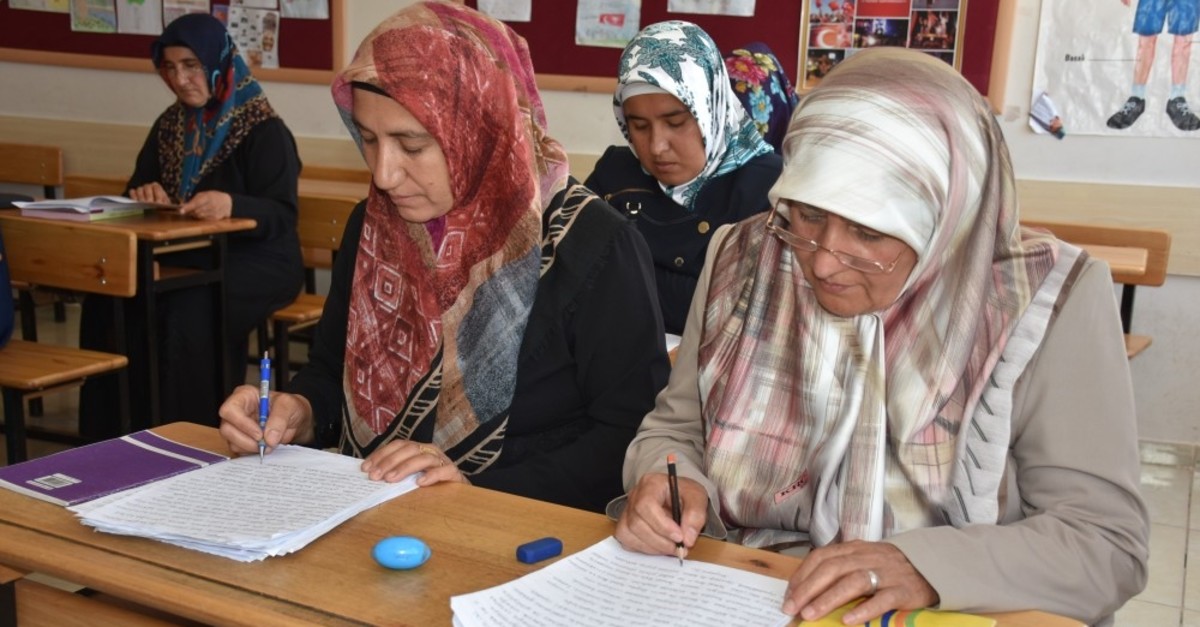 Women attend a literacy class in the eastern city of Adu0131yaman in this undated photo. The literacy campaign particularly targets women who were forced to drop out of school by their families.
by Tülay Canbolat Jun 08, 2019 12:17 am

A literacy campaign spearheaded by first lady Emine Erdoğan has touched the lives of nearly 1 million people, including three older women from Sivas who say their lives were ‘illuminated' after they learned to read and write

The average education level is higher than ever in Turkey, but there are more than 2 million illiterate people, according to unofficial figures. A campaign launched by Daily Sabah's parent company Turkuvaz Media Group last year and endorsed by first lady Emine Erdoğan, quickly gained traction and reached about 1 million people. Three ladies from the central province of Sivas, who had not learned to write and read in school for various reasons, gave an account of how being literate illuminated their lives. Raziye Tombul, Hürü Dülek and Elif Çınar say they longed to go to school for years or at least learn how to write a few letters.

The Literacy Mobilization Campaign by Turkuvaz Media, which was actively endorsed by Erdoğan, turned their dreams into reality, and they found themselves in schools and at desks where students the same age as their grandchildren sit for reading and writing. The determination of the elderly women hailing from villages and small towns and their longing to be in school again were what drove them to walk to school every day with their grandchildren, clutching books and notebooks tightly in hands not accustomed to writing.

The three women signed up months ago for free literacy classes at Sivas Public Education Center, a lifelong learning facility that helps women become literate and also teaches them handicrafts, like weaving. They were among hundreds of thousands across the country who were encouraged by the campaign to pursue literacy again after they dropped out of primary school. Classes made them feel "happy and changed," the women said.

Raziye Tombul, 58, said she lived in a village where girls seeking to go to school were looked down upon. This warped patriarchal mindset still prevails in some rural parts of Anatolia, and girls get a frown of disapproval from their parents even if they want to go to primary school only to be literate. A nationwide campaign to encourage families to send girls to school largely ended the practice, while authorities stepped up inspections of families with girls of school age. This helped the decline in the number of illiterate women, along with introducing mandatory education of 12 years for children. Mandatory schooling was only five years when Tombul was a child, and even then, families were reluctant.

I was only looking at what they wrote

She recalls her father exploiting a legal loophole so that he'd register her in the civic registry later; therefore, she'd be recorded as older than she was, and the family would not have to send her to school. Along with the patriarchal mindset, this was of economic necessity for rural families, where parents sought to recruit as many of their children they could to earn a living for the household. Tombul spent her childhood caring for the family's sheep in the mountains. "From school age to adolescence, I was in the mountains. Some friends, girls and boys of my age would go to school and used to tell me what they did at school that day. I was only looking at what they wrote in their notebooks. I used to be excited when I saw their books, but I didn't know what they were about," she recounted. Her passion for reading did not die, but a rough life forced her to skip school for decades before she returned to school thanks to the literacy campaign. 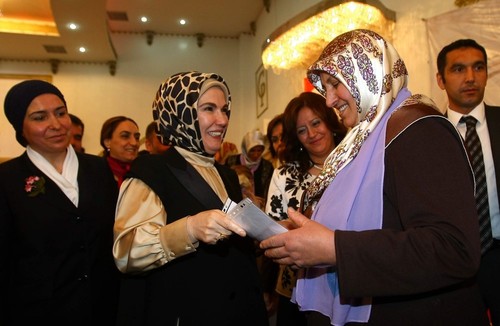 First lady Emine Erdoğan, who championed the campaign launched last year, is known for her support of literacy campaigns. Here, she delivers certificates to graduates of a literacy class in Istanbul in April 2011.

Tombul had faith that she'd have time and an opportunity to be a literate woman one day, when she was still a child. That was what made her keep the storybooks her friends gave her when she was still a 6-year-old girl. She neatly put them in a bag she took while shepherding the sheep then and took them with her every day, looking at the pictures and illustrations. "I would hide them in the bottom of the bag, so my father wouldn't see them," she said about her father's staunch opposition to women's literacy. Just as her grandchildren grew enough to learn reading and started reading to her from the storybooks she'd kept, Tombul heard about the literacy campaign. "I heard the president and first lady were behind it, and everyone would be able to learn writing and reading easily. I was very excited and could not sleep the night before I went to [the public education center] to sign up for classes. I went there with my grandchildren and took my books with me. I was looking forward to reading them on my own so much," she said.

Hürü Dülek, 60, hails from Yıldız village in Sivas. Like Tombul, she always dreamed of reading, but her parents decided it was better for her to skip school and help the family with daily chores. "I always wanted to be a teacher," Dülek said. She remembers the days she cried while watching her friends going to school and how she kept a book of tales with pictures she found when she was 7. "I read it 53 years later," Dülek said with relief. "I can read bedtime stories to my grandchildren too," she added. Being an illiterate girl was not a big deal but when she grew up, Dülek faced obstacles everywhere. "I wasn't able to find the bus I was supposed to take to go somewhere for example. I had a cellphone, but I didn't know how to use it. I was like a deaf mute," she said. Now a literate woman, Dülek plans to study teaching. "They tell me I am too old to be a teacher. I am not sure if it is late, but I will do my best," she added.

Elif Çınar, 70, said other children would work in the fields in the summer before they donned "black uniforms" for school in the autumn. Her father, however, was a stern man and decided that she would not go to school like the other girls. "I lived a good life, but the only thing missing was schooling," she said. Çınar remembers the time when she was lost in the city because she did not know how to read street signs. "I've yearned to learn writing and reading for years. I am grateful to the president and first lady for giving me an opportunity. They did a great job for women like me," she said.