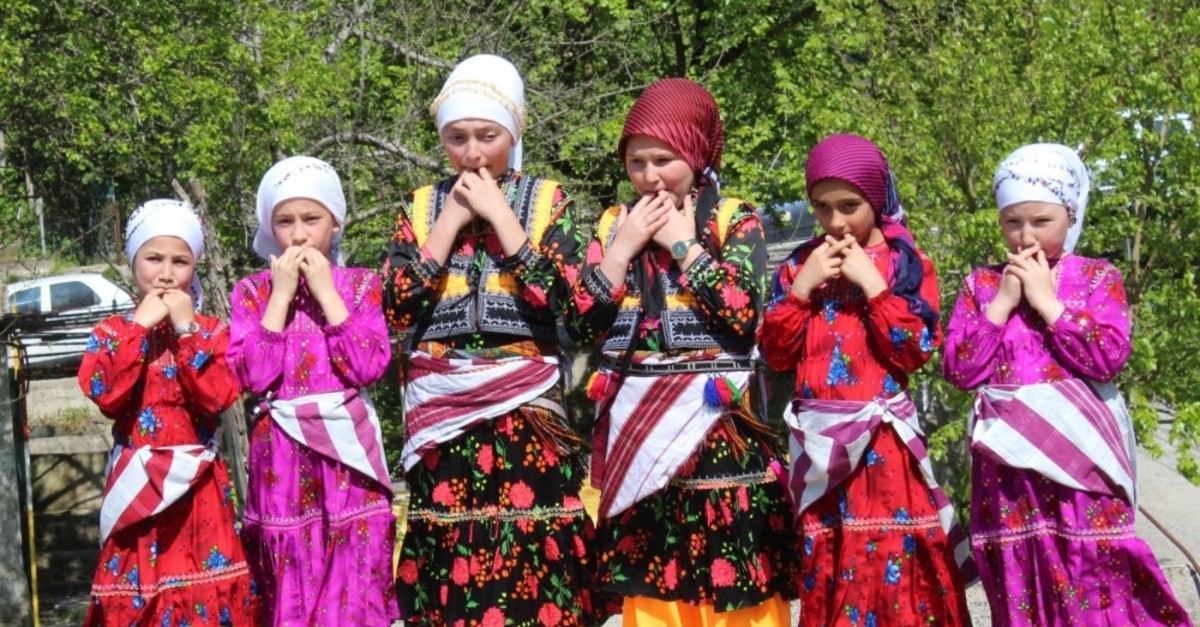 A group of children in traditional costumes gesture in ,kuu015fdili,, Giresun's whistled language, in this undated photo.
by Daily Sabah with AA Jul 02, 2019 12:10 am

‘Bird language,' as a few locals call it, now has its own elective course at a Turkish university that is hoping to revive this endangered whistled language from the Black Sea region

Ever wondered how one can whistle his or her way to communicate with others, without uttering a single word? A university in northern Turkey offers its students the first ever elective course on "bird language," a whistled form of communication peculiar to Kuşköy (literally Bird Village) in Giresun.

What started as a primitive way of communication between a group of villagers in this Black Sea region's Çanakçı district now will be studied at Giresun University's Faculty of Tourism.

The university started training an academic to teach the course to sophomore and senior students in Recreation Studies at the faculty. Officials say it will take another three years for a comprehensive course to be introduced.

The faculty's dean, professor Musa Genç told Anadolu Agency (AA) that the whistled language, included in UNESCO's famed list of Intangible Cultural Heritage List in 2017, has been used for centuries by locals in Kuşköy and was first studied by scientists in 1956 as part of a linguistics study and first research papers were published in 1968 on the language, making it more widely known. Studies also proved that the language was preserved intact since its inception in an unknown century.

Yet, as UNESCO pointed out when it included it in the list of heritage in need of safeguarding, it faces the threat of extinction as technology marches on.

Genç said more means of communications in the new century and migration from the village decreased the number of people speaking the language. Indeed, UNESCO says cellphone use contributed to a decline in the number of practitioners.

"We are worried that this whistled language will soon only be a 'show language' rather than [a basic communication tool] and will be a dead language. We need to preserve this cultural heritage and convey it to future generations," Genç said.

Teaching it to the youth seems to be the only option now, as the language has been passed on from parents to children in Kuşköy for centuries. The university coordinates efforts with a local tourism research center and will set up a crew to improve the elective course. The center will first hold courses in Kuşköy and locals scoring high in those courses will also be eligible to teach the language at the university. Genç said the elective course will give an opportunity to students to work as a tour guide.

Apart from its classic use, the university focuses on the other aspects of "bird language." Genç said they focused their studies on whether it can be used as a key communication method in search and rescue work in the aftermath of disasters.

The Black Sea region is in fact prone to disasters such as floods and landslides due to its rough terrain. The university plans to create a written alphabet for the language that has been confined to voice signals, to turn it into a language with 1,000 written words or more.

The language, as its name implies, involves speakers [or whistlers] imitating the sounds of birds through whistling. It is believed to be used by around 10,000 people currently and helps speakers to carry messages as far as 5 kilometers away with a frequency of a 4,000-decibel sound.

It is basically an adaptation of the Turkish language, in a shorter form, although it adheres to the lexical and syntactic rules of vocal Turkish. Similar whistled languages are also present in Mexico, the Canary Islands, France and Greece, and as in Kuşköy, they are largely confined to rural areas where the population is forced to live scattered across a rough landscape divided by high hills and steep valleys.