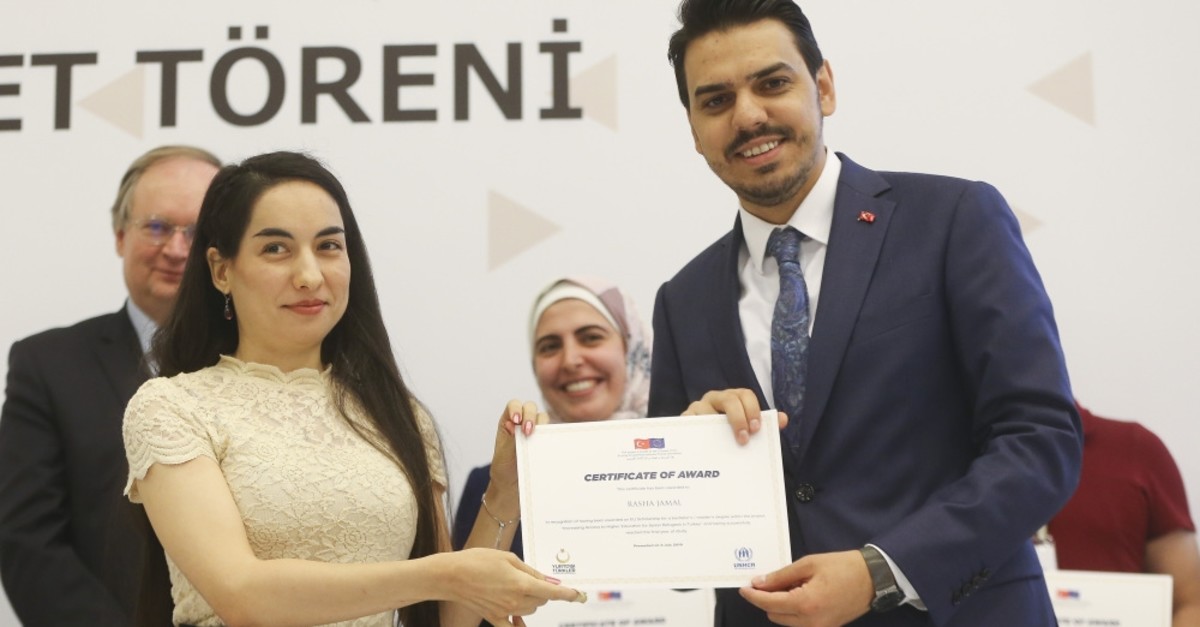 Syrian students forced to leave their war-torn country marked their graduation from Turkish universities yesterday in a ceremony in the capital Ankara. The students will contribute to building society in both countries, the head of the EU delegation in Turkey said at the ceremony.

The European Union partially funds students' education in Turkey. "Your presence here is also very powerful message because it shows that you have succeeded in making a life for yourselves in Turkey," Christian Berger told students.

Berger noted that the students managed to get out of a very difficult situation in Syria and worked very hard and learned the Turkish language. Stressing the importance of higher education, as it determines many students' futures, Berger said that the EU delegation's focus in Turkey was education. "Our approach to education is from kindergarten all the way to university," he added. He said the delegation instituted a twofold approach to the issue, providing support to both refugees who fled to Turkey and their host country, which welcomed the refugees. Berger said Syrian students who received higher education in Turkey would contribute to building society "either here or back in Syria" if they chose to return.

Abdullah Eren, the president of Turkey's Turks Abroad and Related Communities (YTB) office, said they had taken care of university fees for Syrian students in the country since 2014. "Syria and Turkey are two countries that have very old historical and cultural ties," he said, adding that the close ties were also affected by the Syrian civil conflict. Eren said he believed both the Turkish and Syrian youth would return ties to pre-civil war levels and beyond. "Since 2014, we have given scholarships to over 6,000 students as the YTB," he said, adding that the education of around 3,000 of them were ongoing. He thanked the EU and the U.N. Refugee Agency (UNHCR) for their contributions to Syrian students' access to higher education. Eren said since 2012, some 15,000 students were granted scholarships via the YTB, the EU and the UNHCR.

"According to our figures, in 2021, nearly 230,000 Syrians will be awaiting or applying to education in our universities," he said, adding that the roughly 3.5 million Syrians that Turkey currently hosts will be a catalyst for inseparable ties between the two countries in a few decades.

Noting that being away from one's country is difficult, Eren said, "Turkey is your homeland as well."

For her part, UNHCR's Turkey Representative Katharina Lumpp also congratulated the students who completed their education in Turkey. She said their determination and hard work was an "important sign of hope for the future." Lumpp noted that the partnership between the EU, the YTB and the UNHCR aims to support access to higher education for refugees in Turkey. "Higher education is often overlooked during times of crisis," she added.

Wala Muhendis, one of the Syrian students, said they came to central Konya province in Turkey in 2014 from Aleppo due to the civil war. Saying the language barrier posed some difficulties when she first arrived, Muhendis said she overcame these problems after starting to learn Turkish in 2015 with the support of the YTB. Muhendis said she would graduate this year from Konya Technical University. She thanked the YTB, the U.N. and the EU for the scholarship they provided.

Zahraa Mawaldi, a graduate from Necmettin Erbakan University in Konya, also expressed gratitude for the support she received in Turkey.