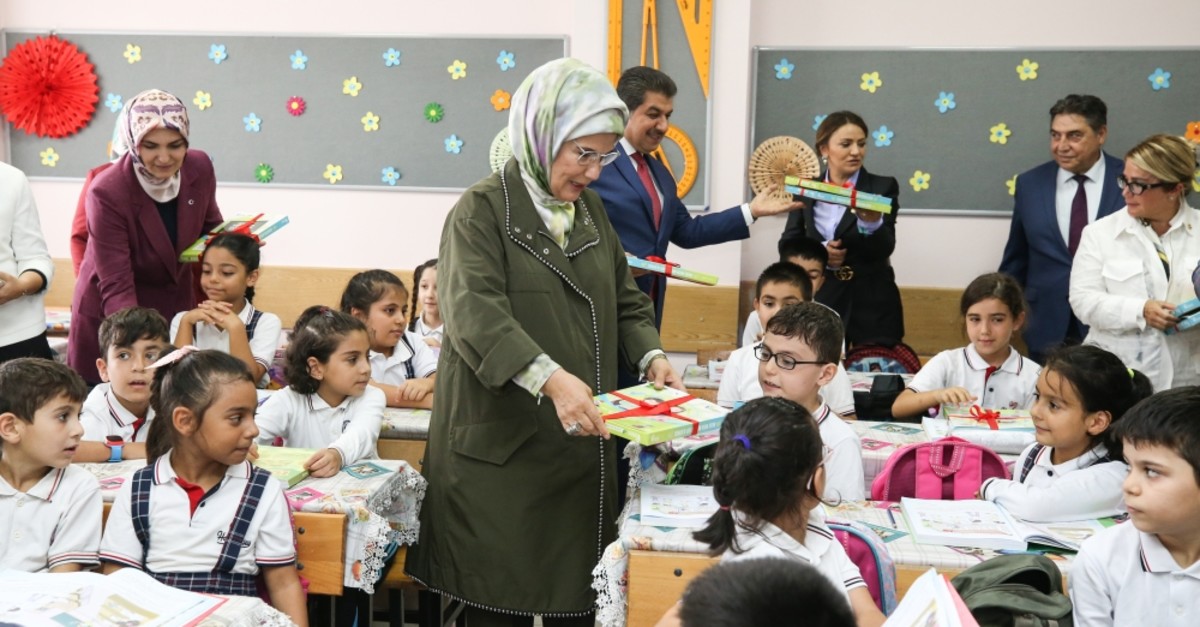 First lady Emine Erdoğan, who has championed Turkey's ambitious zero waste campaign, delivered notebooks made of recycled material to students in Istanbul on Friday. The project is the brainchild of the municipality of the city's Esenler district. Contributing to the zero waste campaign, the municipality also opened an exhibit on other projects they pursued, from recycling bins placed on streets to detergent made of waste oil and projects to collect used batteries and plastic bottle caps. The municipality is also behind ESMATİK, a machine that loads credit onto cards used to purchase bread from the municipality-run kiosks. Credit is offered in exchange for depositing waste like glass, metal and plastic bottles.

Some 500,000 notebooks made of recycled material are being delivered to 90,000 students at schools across Esenler. As she delivered notebooks to students, Erdoğan said she hoped the project would set an example for Turkey. She also urged students to support the zero-waste campaign by instructing their parents to sort waste at home.

The zero waste project, which has emerged as a waste management philosophy, envisages the most efficient use of resources by preventing waste or minimizing the amount of waste when it is generated. If waste generation is unavoidable, it aims to separate the waste at its production point and to recover it as raw material or energy.

Turkey's zero waste project was initiated two years ago by first lady Emine Erdoğan, and it aims to reduce the volume of nonrecyclable waste. The project is also listed in the Environmental Performance Review of the Organization for Economic Co-operation and Development (OECD).

If no waste is produced at the end of a day at home, it is called a "red apple" – a difficult goal to achieve. However, the effort to achieve this goal will push people to produce as little waste as possible and devise methods to recycle disposable items.

In recent years, schools and municipalities in Turkey have expanded the number of competitions that encourage children to find creative solutions using waste materials. This will lead to generations that will shape the future to be more prone to recycling than the middle-aged and elderly.

The recycling rate is 46% in European Union countries compared with 13% in Turkey. The project aims to increase that ratio to 35% in Turkey by 2023. As of May 2019, a total of 18,750 public institutions in Turkey had begun to be included in the zero-waste project, separating their waste at its source.

In order to achieve success in the zero-waste project and increase the waste recycling rate, household wastes should also be separated at their source and collected with this system.

Within the framework of Turkey's zero waste project, 126.1 tons of paper and cardboard were recycled, preventing the cutting down of 2,142 trees, while 49 tons of plastic waste was recycled, saving 798.7 barrels of petroleum. A total of 25.5 tons of raw materials were saved by recycling 8.7 tons of glass waste and 11.5 tons of metal waste, while 3.7 tons of compost were produced from 9.1 tons of organic waste and used for growing vegetables and fruits.