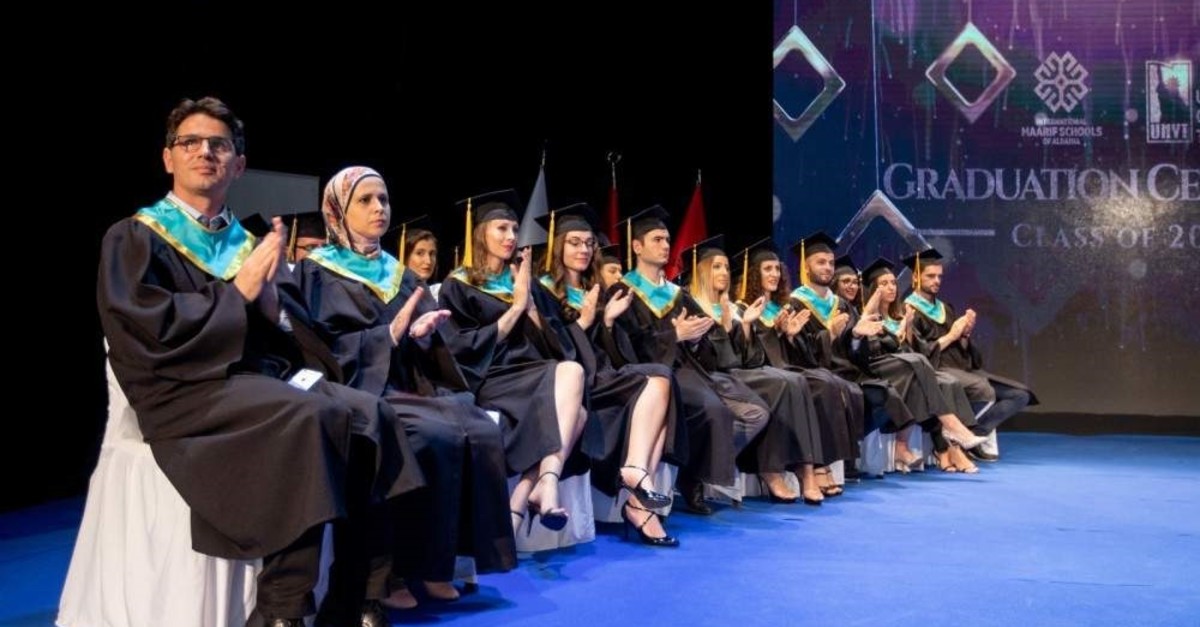 Students of the university at a graduation ceremony. (Courtesy of Maarif Foundation)
by Ceyda Karaaslan Oct 24, 2019 5:13 pm

The University of New York Tirana bought by Turkey's Maarif Foundation last year has turned into a favorite higher education institution in the Balkans; in one year it has joined international university networks and attracted students from 16 countries

The University of New York Tirana was Albania’s first private university when it was founded in 2002. It has now turned into the “Harvard of the Balkans” after the 2018 acquisition by the Maarif Foundation of Turkey. Situated in the capital Tirana, the university quickly became a major attraction for students from other countries. A member of the Balkan Universities Association and the European University Association, the university also offers dual bachelor's degrees from the State University of New York-Empire State College in the United States and master's degrees in collaboration with the University of Greenwich in the United Kingdom.
The university, which became one of the biggest international universities in the Balkans, also seeks to cooperate with prestigious European universities on research. Today, 900 students from 16 countries have attended the institution, and officials expect a rise in this number this year.
Changing its educational approach after being acquired by Maarif, the university will launch its Learn and Practice project this year, giving students an opportunity to study and work in the fields they are interested in. The university cooperates with Albanian companies for the project to give students a chance to complete part of their education by working in sectors they study, banking in particular.
Speaking at a ceremony to mark the new school year earlier this week, Turkey’s Tirana Ambassador Murat Ahmet Yörük said the university will be the best not only in Albania but also in the region. Yörük said the increasing number of students at schools run by Maarif was an indication of the Albanian public’s trust in the foundation and Turkey in general. He said the opening of new departments at the university would ensure a rise in quality. Cihad Demirli, a board member of Maarif who spoke at the ceremony, said some 1,200 students attend schools run by the foundation in Albania, from kindergartens to universities, and noted a 30% increase in the number of students attending their schools, though it has been only one year since the foundation has been active in Albania. The university’s president, professor İsmail Kocayusufoğlu, says the University of New York Tirana opened Albania’s “doors to the world.”
The Maarif Foundation was created in cooperation with the Ministry of National Education with the purpose of providing educational services abroad and to run schools that used to belong to the Gülenist Terror Group (FETÖ) in the past. Since its establishment in 2016, the foundation has made official contact with 100 countries and set up offices in several countries to take over FETÖ-linked schools. It currently runs 314 schools in 41 countries, from the Balkans to Asia, along with 42 dormitories for students.
Last Update: Dec 20, 2019 1:13 am
RELATED TOPICS