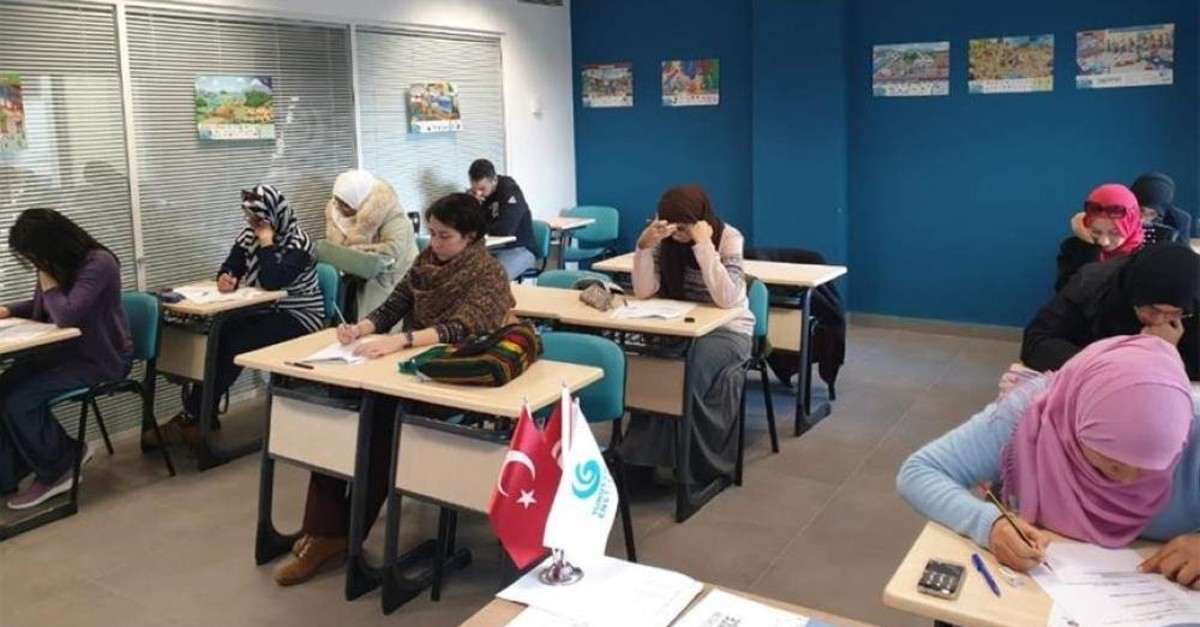 The institute also offers traditional Turkish classes in dozens of countries. (AA Photo)
by Daily Sabah Jan 12, 2020 6:38 pm
The state-run Yunus Emre Institute, which is charged with promoting Turkish language and culture around the globe, aims to provide education for up to 1 million distance learners as part of its online Turkish language program, the agency's president said.

Ateş explained that, given the vital role played by technology in modern language learning, the group launched the program in 2017 free of charge.

"Looking at the profiles of the users, Egyptians showed the most interest in our courses. Egypt is followed by Syria, Saudi Arabia, Algeria and Jordan, respectively. We could say it was an achievement to reach 320,000 users in less than three years, but we don't see it as enough. We want to keep developing the teaching portal and reach 1 million users by 2023," he said.

The interactive portal includes courses on reading, writing, speaking and listening skills, as well as offering gamified tests. Users can earn scores and unlock achievements depending on their skill, and share their progress with their friends on social media.

The portal is accessible at www.learnturkish.com and will soon have a dedicated mobile application.

Launched 10 years ago as a small state-run agency to promote Turkish language and culture, the Yunus Emre Institute is now a globe-spanning entity endearing Turkish culture to countless people. With 157 offices on five continents, the institute has helped teach Turkish to 144,000 people. It has also organized hundreds of activities concerning music, art exhibitions, literature, language, gastronomy, cinema and handicrafts to boost Turkey's cultural ties with other countries.

The institute was part of Turkey's efforts to strengthen its "soft power," reaching out to countries with historic and cultural ties, working in partnership with others through cultural projects and boosting the country's profile in the international community. By setting up a developmental aid agency and foundation to set up international schools across the world, Turkey has been influential on the international scene over the last decade, reaching out to disadvantaged communities as well as bolstering ties with countries it has maintained relations with dating back centuries.

Named after the 13th-century poet Yunus Emre, an influential writer and poet who made staggering early contributions to the Turkish language, the institute also imbibes the all-embracing philosophy as featured in one of his lines of verse; "Let us get to know one another."
RELATED TOPICS