650,000 refugee children enrolled in Turkish schools as hundreds of millions around globe without education 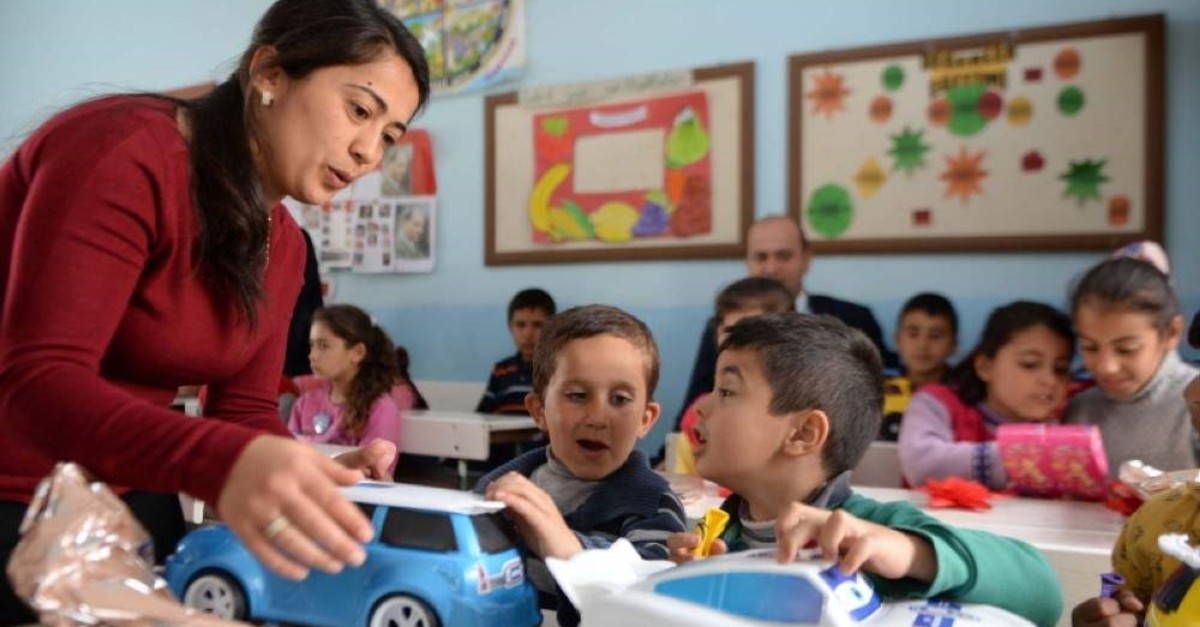 This file photo dated March 4, 2019 shows students playing with toys distributed as part of a social awareness project at an elementary school in southern Turkey's Kilis, which houses more refugees than its 150,000-strong population. (AA Photo)
by Agencies Jan 25, 2020 2:15 pm

As the United Nations pointed to an alarming lack of school attendance for hundreds of millions of children around the globe, Turkey has quickly figured out how to use public resources to get more than half a million refugee children enrolled in schools, head of a Turkish charity working on refuge issues said Friday.

"Turkey has quickly managed to mobilize public resources and approximately 645,000 refugee children were enrolled in schools in a very short period, while the need was high above its capacity," Karataş said. "The right of education is supported in Turkey for all children whose families have sought international or temporary protection, and they have rights to enroll in public schools," he added.

75 million children in crisis zones unable to go to school

His comments came as the U.N. deputy chief said Friday there is an "alarming" crisis in education, pointing to the 258 million children under the age of 17 who are not going to school – and only 49% that are completing secondary education. In addition, about 770 million adults are illiterate, most of them women, Deputy Secretary-General Amina Mohammed told the U.N. General Assembly on the International Day of Education. She said the situation is "alarming," not only because of the millions who aren't getting an education – and never did – but also "because of the crisis in the number of children, young people and adults who are in education, but not learning."

Former British prime minister Gordon Brown, the U.N. special envoy for education, said one reason why the situation is "so grave" today is that there are 75 million children in crisis-affected countries who are unable to go to school, have their education disrupted, and don't attain any educational standards. Yasmine Sherif, director of Education Can't Wait which is the first global fund dedicated to education in emergencies, told a news conference at the U.N.: "Just think what will happen with this generation, and with all of us one day if these 75 million children don't access a proper, decent quality and continued education," she said.

The fund has received pledges of almost $590 million since it began three years ago and is helping youngsters in 30 conflict and crisis-affected countries from Syria and Afghanistan and Mali, Bangladesh and the Central African Republic, she said. Brown, who chairs the fund's high-level steering group, said it is crucial for all levels of education. He said only a fraction of refugees – 1-3% – go on to higher education, compared, for example, with Syria where it was 20% before the conflict began in 2011.

Stressing a variety of adult education activities that refugees can benefit from, such as Turkish language courses and vocational activities which are offered for free by Turkey's Ministry of National Education (MEB) General Directorate of Lifelong Learning, Karataş drew attention to the importance of education for the integration process. "Also, MUDEM has been conducting Turkish language courses in line with MEB," Karataş said. He said refugees are mostly interested in learning Turkish which helps them stand on their own and adapt socially. "One of the biggest problems that migrant children face in the process of social cohesion is the language barrier," he said, adding that communicating in Turkish is a serious obstacle not only in education, but also in daily life, hospitals and public institutions. He also said education can prevent children from situations like early marriage and child labor by helping increase their cohesion level.

MUDEM was established in Ankara in 2014 to carry out activities at home and abroad for problems of forcibly displaced persons and it has been providing social, legal, and psycho-social support, organizing various activities for the integration of refugees in accessing rights and services. Despite this high success, approximately 400,000 children are out of school for various reasons. This number contains a high risk for children's future.

MEB, the U.N. International Children's Emergency Fund (UNICEF) and the Association for Solidarity with Asylum Seekers and Migrants (SGDD-ASAM) work hard to increase school attendance. "But the good news is that the attendance percentage is increasing rapidly each year," Karataş concluded.

The U.N. goal for 2030 is to "ensure inclusive and quality education for all and promote lifelong learning."

At an event at the U.N. Educational, Scientific and Cultural Organization in Paris, UNESCO Director-General Audrey Azoulay said "not only do we need massive investment, but an overhaul of educational systems is necessary." To rethink education and prepare the coming generation to deal with major issues like the digital revolution and the climate emergency, Azoulay said UNESCO appointed a commission of independent experts last September led by Ethiopia's President Sahle-Work Zewde to produce a report in November 2021 on the Futures of Education.

General Assembly President Tijjani Muhammad-Bande told the U.N. event that "there has been an increase in school enrollment rates worldwide, with more children going to, and staying in school longer. "While this is commendable," he said, "it is unacceptable that 20 years into the 21st century about 258 million children and youth do not attend school, 617 million children and adolescents cannot read and do basic math and millions of refugees and internally displaced persons, and people with disabilities are out of school," he said.

Muhammad-Bande called this "a blight" and urged governments to ensure access "to free and quality primary and secondary education, as well as affordable and inclusive vocational and technical education." Deputy Secretary-General Mohammed said: "This international day must be a call to action... so that quality education for all is no longer a goal for tomorrow, but a reality."