Objections to poll results sorted out 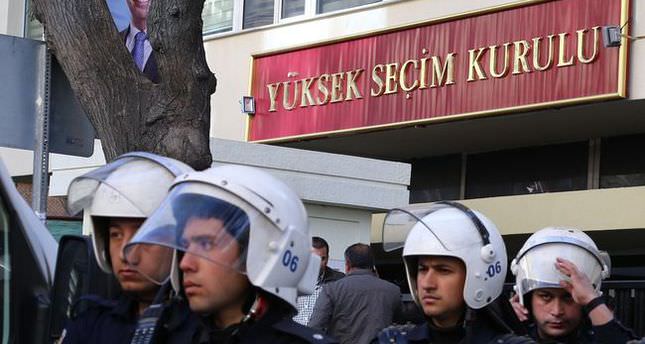 Close results from Sunday's mayoral elections spur a multitude of objections, with the election watchdog YSK sorting out legitimate concerns

ISTANBUL — Mayoral candidates who lost in Sunday's elections objected to the results in some provinces and localities. The Supreme Election Board (YSK) has been inundated with objections since Sunday.

In some of the cases, the objecting party gained more votes whereas in others the results worked in favor of another party. In Antalya, a city located along Turkey's Mediterranean coast, the election results showed the Justice and Development (AK) Party had more votes than the Republican People's Party (CHP). CHP candidate Mustafa Akaydın opposed the results and called for a recount, arguing there was misconduct during the first count.

Akaydın's objection was rejected by the Supreme Election Board (YSK). Akaydın said there was nothing else the party could do and he has "complete trust in law." In the eastern province of Ardahan, CHP candidate Mete Özdemir objected the results in 25 boxes out of 45.

While the gap between the CHP and AK Party was 55 prior to the recount, it went up to 75, increasing AK Party's votes. Faruk Köksoy, AK Party's candidate and the mayor of Ardahan, noted the elections were a democratic race and his party believes in democracy.

"Therefore we do not have anything against the objections," said Köksoy. Ballot boxes in Muğla's Dalaman and Köyceğiz districts were also recounted, resulting in the transfer of victory from the AK Party to the CHP. In Köyceğiz, AK Party candidate Kamil Ceylan was ahead with 10 votes, which was objected by the CHP. After the recount, the CHP had four more votes than the AK Party, who is expected to object to the figures resulting from the recount. The race in Dalaman, on the other hand, was between three candidates:

Sedat Yılmaz, the current mayor from the Nationalist Movement Party (MHP), AK Party candidate Süleyman Camuzcuoğlu and CHP candidate Muhammet Şaşmaz, who also opposed the election results after the announcement the AK Party won. A recount resulted in a victory for the CHP, which many expect to be objected by the AK Party and MHP.

The AK Party objected the election results in the Kartal district in Istanbul when it was discovered over 13,000 votes were counted as invalid in 325 ballot boxes. Upon request, the local election board inspected and recounted the ballots, which resulted in an increase of CHP's votes and the CHP's victory in the district. In response to the results, CHP Group Deputy Chairman Akif Hamzaçebi said the provisions of the law were fully utilized. "Law in Turkey is still standing, as was evident by Kartal's election board's respectable decision," he said. One of the most contentious cities was Yalova, where the initial results showed the AK Party won by a single vote.

The CHP objected and requested a recount of votes in 124 ballot boxes based on the grounds that 154 ballots with votes for the CHP were written on paper as "1" and their votes were counted in the Democratic People's Party (HDP) column instead.

Following the recount, CHP candidate Vefa Salman was ahead of the others with five votes. The AK Party is expected to object the results shortly after the recount. Yakup Bilgin Koçal, AK Party's candidate in Yalova, said CHP's Group Deputy Chairman Muharrem İnce was trying to provoke and misinform the people of Yalova. Acknowledging the fact that there were errors in two ballot boxes, Koçal said there were also errors in the counting of the AK Party's votes, which were allegedly written under the Great Unity Party's (BBP) column in the official report and noted his party submitted a formal objection to the results.