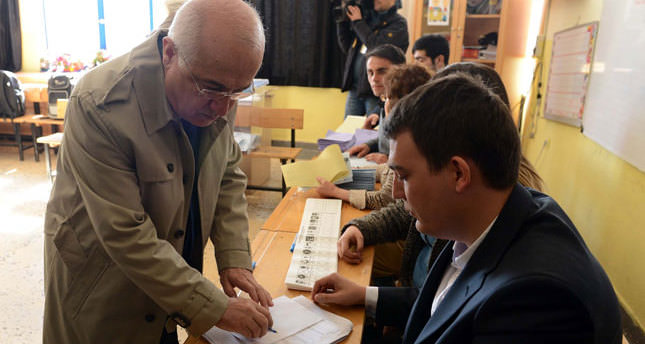 by AA Mar 30, 2014 12:00 am
ANKARA — Turkey's Parliament Speaker Cemil Çiçek and his family casted their votes in the Gölbaşı district of Ankara on Sunday.

Çiçek said that the recent political tensions, which have engulfed country, will dissipate following confirmation of the election results on March 31,"Turkey needs peace and fraternity," he added.

The Minister of Energy and Natural Sources Taner Yıldız voted in the Yenimahalle district of Ankara. Speaking to press members he said "I hope the March 30 polls will contribute to Turkey's political stability, development and growth."

Meanwhile, casting his vote in Istanbul`s neighbor Kocaeli province, Fikri Işık, the minister of transportation stressed the importance of ballot boxes and the role of the people in determining the results.

"That everyone accepts the results of these elections is an issue of the belief in democracy," said Işık, adding he believed people would go to polls in freedom, privacy and peace and that there would be a big turnout.

Another official, Defense Minister İsmet Yılmaz, voted in Turkey's central province of Sivas wishing that the elections bring comfort to a troublesome period in the country.