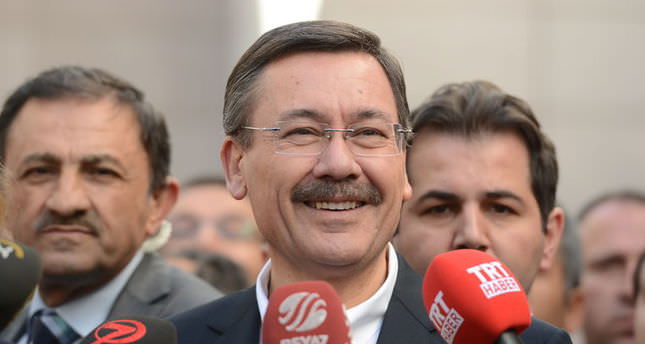 As the final votes were being tallied on Monday morning for Turkey's March 30 local elections held on Sunday, Ankara's incumbent mayor and AK Party candidate Melih Gökçek announced his victory in the capital.

The Ankara race turned out to be one of the tightest nationwide as the leading Justice and Development (AK) Party's candidate Melih Gökçek raced neck and neck with the Republican People's Party (CHP) candidate Mansur Yavaş.

In a press conference held at 6:30 am Monday morning, Ankara's incumbent mayor Melih Gökçek announced his victory over the main opposition party candidate, stating, "As of now, I am 30,000 votes ahead of the Republican People's Party candidate. There are still 62 ballot boxes to be counted, however according to our calculations 99.5 percent of the poll's results have been counted." Gökçek was joined by Deputy Prime Minister Emrullah İşler, Justice Minister Bekir Bozdağ and AKP Deputy PM Salih Kapusuz at the press conference held Monday morning to announce his victory. Gökçek also added that the AK Party has increased its vote by 6.5 points compared to the previous election.

Yavaş erroneously declared a victory in the polls on late March 30, prior to a majority of the votes being counted, which led to confusion regarding the capital's results.