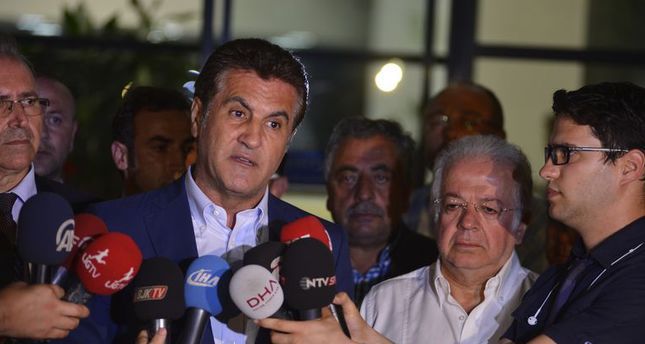 by Daily Sabah Dec 25, 2014 12:00 am
Mustafa Sarıgül, the former mayor of Istanbul's Şişli district, who ran as a candidate to become Istanbul's mayor in the March 30 local elections, has announced that he will be participating in the 2015 general elections with a new party called the Turkish Change Party, instead of the Republican People's Party (CHP).

It was reported by Yenişafak daily that the former mayor's new party will be founded through the merging of the Movement for Change in Turkey (TDH) – which was led by him – and the People's Ascent Party (HYP).

He is expected to officially announce the name of the new party and the party platform at a general meeting that will take place in Ankara on Jan. 10.
The Movement for Change in Turkey was led by Sarıgül and had organizations in 77 provinces throughout Turkey.

Sarıgül had joined the CHP and abolished the TDH during the 2014 local elections, in order to give the CHP "a chance" to win the mayorship of Istanbul, the largest city in Turkey. However, his loss in the elections damaged his relations with the CHP.

Sarıgül and his son Emir Sarıgül, the deputy mayor of Şişli, were recently involved in a conflict in the Şişli municipality when the latter allegedly insulted Şişli Mayor Hayri İnönü. There were also allegations that Mustafa Sarıgül threatened İnönü's family.

Emir Sarıgül announced his resignation last week from his post as the deputy mayor of Şişli but leaked documents indicated that his administrative powers were removed by İnönü.