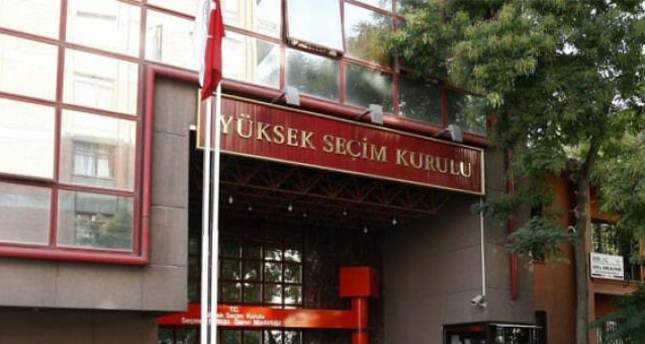 by Daily Sabah Feb 01, 2015 12:00 am
Turkey's High Election Board has announced the political parties that have been found eligible to take part in the June 7 parliamentary elections, in accordance with the legislation. Accordingly, 31 political parties can join the elections.

Political parties need to be organized in at least half of Turkey's provinces six months prior to the Election Day, or they have to have a parliamentary group in Turkish Grand National Assembly, which requires a minimum of 20 deputies.

The High Election Board has also announced the election calendar. Voter lists will be announced by neighborhood headmen on March 14. The sorting of political parties on voting tickets will be decided by the Board on April 3. The deadline for applications for independent candidacy to the provincial election board is April 7. As of April 24, definite candidate lists will be announced by the Official Gazette and media. Voting will begin at customs and consulates on May 8. Electoral prohibitions will begin at 6:00 p.m. on June 6.

With a 2007 constitutional change, Turkey changed the election periods to every four years from five years. In the last general election, which was held in 2011, the Justice and Development Party (AK Party) received nearly 50 percent of the votes, followed by Republican People's Party (CHP) with 26 percent and Nationalist Movement Party with 13 percent of the votes.

The political parties that are eligible to join the elections are as follows (in Turkish alphabetical order):