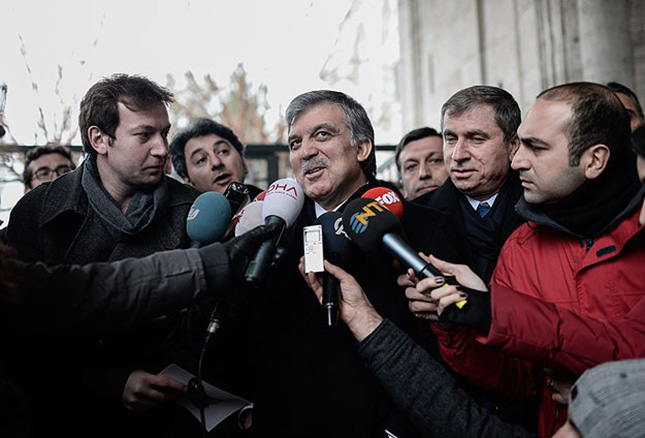 by Nurbanu Kızıl Mar 13, 2015 12:00 am
Turkey's former president Abdullah Gül confirmed on Friday that he will not be running as a candidate in the upcoming general elections which will take place in June.

Responding to questions from the press following Friday prayers, Gül said that he will not be involved in active politics to clarify recent speculations that he will be running as a candidate for the AK Party.

Gül stated that similar rumors had also spread when he left his seat at the end of his presidential term and said that he does not think about taking an active part in politics. "Without a doubt, I was one of the founders of the AK Party" said Gül, adding that he has done invaluable work for the nation with the AK Party and will continue to work for the benefit of the nation and the Turkish state, but added that doing this does not mean he has to be active in politics.

"I want all my friends - at the AK Party - to be successful as their success entails service to the nation" Gül said and underlined that he is ready to provide assistance by expressing his views and thoughts.

Gül's return to the political scene in the upcoming general elections came on the agenda last week following President Erdoğan's remarks, when he said Gül's nomination as a deputy would be a positive development for Turkey. Prime Minister Ahmet Davutoğlu agreed with the president and said that Gül would always be welcome back to the AK Party whenever he wishes and does not need an invitation.