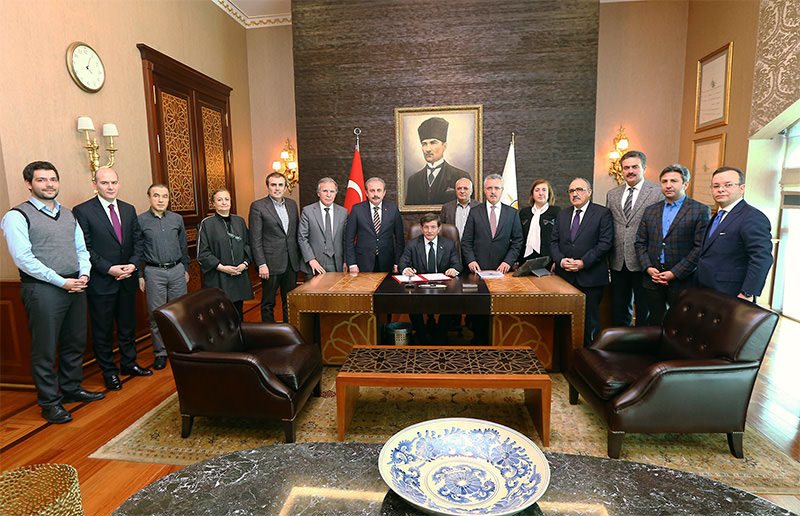 |AA Photo
by Mehmet Çelik Apr 07, 2015 12:00 am
Turkey's ruling Justice and Development Party (AK Party) has announced its list of candidates who will run for the upcoming June 7 general elections. The party officials submitted the candidate list to the Supreme Board of Election (YSK) in Ankara on Tuesday evening .

The list showed that Prime Minister Ahmet Davutoğlu will again be a candidate from Konya, his hometown in Central Anatolia. Speaking after the list was revealed to the media, AK Party Deputy Chairman in charge of elections, Mustafa Şentop, has said that 99 out of the 550 AK Party candidates are female party members and 105 current AK Party deputies have not been included on the list. Another 137 of those who are already in Parliament are included on the party's list.


The new list excludes 70 current deputies as AK Party bylaws does not allow its members to have three consecutive terms in Parliament.

In Izmir's district one, Minister of Forestry and Water of Turkey and current Member of Parliament for Afyonkarahisar, Veysel Eroğlu has been listed as the first candidate. In İzmir's second district, the first spot for candidacy has been given to economist and academician Mustafa İbrahim Turhan, who was previously a CEO and a Member of the Board for Borsa Istanbul.

Former Economy Minister, Zafer Çağlayan, former Interior Minister, Muammer Güler, and former Environment and Urbanism Minister, Erdoğan Bayraktar had declared that they will not run as candidates. In addition, former European Union Minister Egemen Bağış could not run for the elections as he completed his third consecutive term as an MP.

Atalay has said that, despite meeting party's candidacy criteria, many candidacy nominees were not listed as they had close ties of kinship with the current candidates or prominent figures of the party.

Answering a question from the press, Atalay said that Ankara Mayor Melih Gökçek's son, Osman Gökçek, is among those who were left out of the final list.

Atalay added that a new constitution will be one of the main focuses of the election campaign and continued, "Here, a fully democratic constitution that has humanity in its focal point, protects separation of powers, and has governance with very good control mechanisms, is what we hold as the most important. There are examples of parliamentary and presidential systems in the world. These will be discussed, however, a presidential system that will have all these democratic criteria will be the focus of our election declaration."