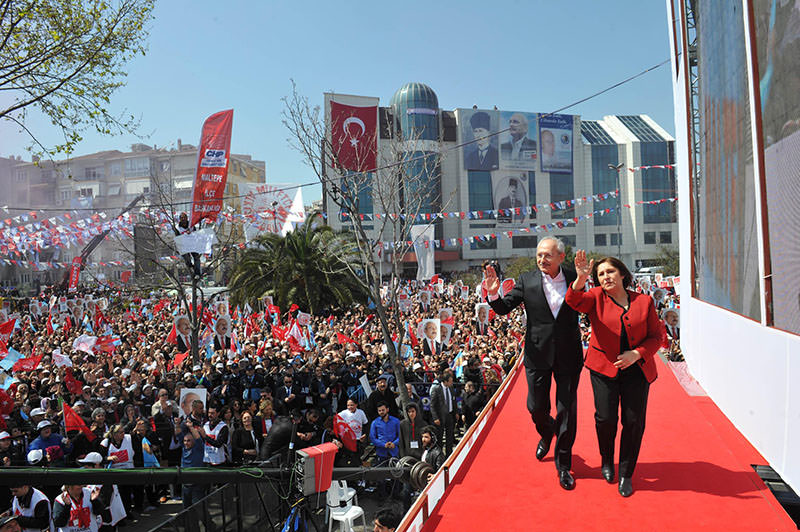 | DHA Photo
by Anadolu Agency Apr 11, 2015 12:00 am
Turkey's main opposition Republican People's Party (CHP) has launched its campaign for the general election in the June poll at a conference in Istanbul.

Kemal Kılıçdaroğlu, the chairman of the party, appeared before thousands of supporters at Istanbul's Kartal Public Square on Saturday, highlighting key points of the party's promises for the 7 June election.

"We as a party discussed in detail Turkey's problem. Our programs, teams and solutions are ready. We will bring what the nation is longing for; economic prosperity, peace and a respected position," Kilicdaroglu said.

He said millions of Turkish people were faced with economic hardships such as debts among many others.

He promised to "eradicate" unemployment and poverty, adding: "Be assured. We will eradicate all problems."

The opposition leader said the party would unveil detailed campaign pledges on April 19 in the capital, Ankara. CHP is expected to organize 50 public meetings all around the country.

Major political parties submitted their candidate lists on April 7, and the Supreme Election Board will announce the list of MP candidates on April 24.

The election campaign will start on May 28 and end on June 6.

About 56 million Turkish citizens will vote in the country's 25th general elections to elect 550 members of Parliament.