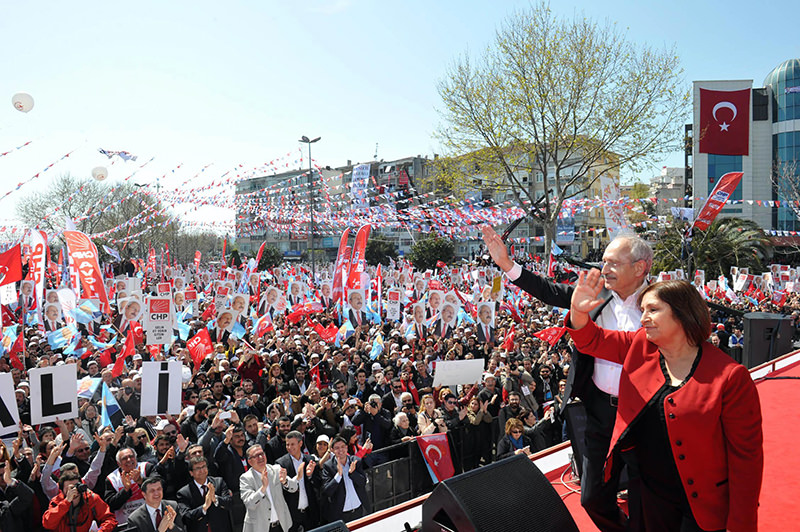 by Ali Ünal Apr 15, 2015 12:00 am
After the ruling Justice and Development Party's (AK Party) announcement of its own manifesto on Wednesday, the public now awaits the main opposition Republican People's Party's (CHP) election manifesto. The CHP administration has stated that the election manifesto is expected to be announced on April 19 in Ankara. However, the main outline of the CHP election manifesto has already been revealed by party executives.

Selin Sayek Böke, CHP deputy chair in the field of the economy, speaking to Turkish daily Posta on Wednesday, listed various points regarding the party's manifesto. She said that they will double pensions, provide free nurseries for everybody, provide two salary bonuses for retirees and zero percent contribution for health expenditure if the party comes to power in the upcoming June 7 general elections. Böke further promised that they will immediately assign 330,000 new teachers and hinted that they will offer credit card debt cancellation.

According to statistics obtained by the Banking Regulation and Supervision Agency (BDDK), the total amount of credit card debt in Turkey is around TL 85 billion ($31.36 billion) and unpaid debts stand at about TL 5.6 billion. Regarding credit cards, Böke said that they will solve the problem. "We know that we can solve this problem, our project is ready and we will announce it soon," she said in the interview with Posta on Wednesday, without giving more details.

Finance Minister Mehmet Şimşek recently refuted the CHP's election pledges and said that these kinds of promises are classic and populist pre-election promises. "They need to be corrected within this framework because they are not realistic. Look, the budget deficit we estimate for 2015 is around TL 21 billion. This year, the total amount of retired salaries will be TL 159 billion. Two bonuses a year means TL 26.5 billion. That will make the budget deficit go up to TL 47.5 billion," Şimşek said on Monday.

Even though the CHP aims to receive more than 35 percent of the vote in the elections and has incorporated new public relations methods to be used during the campaign process, the latest poll by the Ankara-based pollster GENAR indicates that the main opposition's votes have decreased. According to the survey, the CHP would receive only 25 percent of the vote in the June 7 general elections.