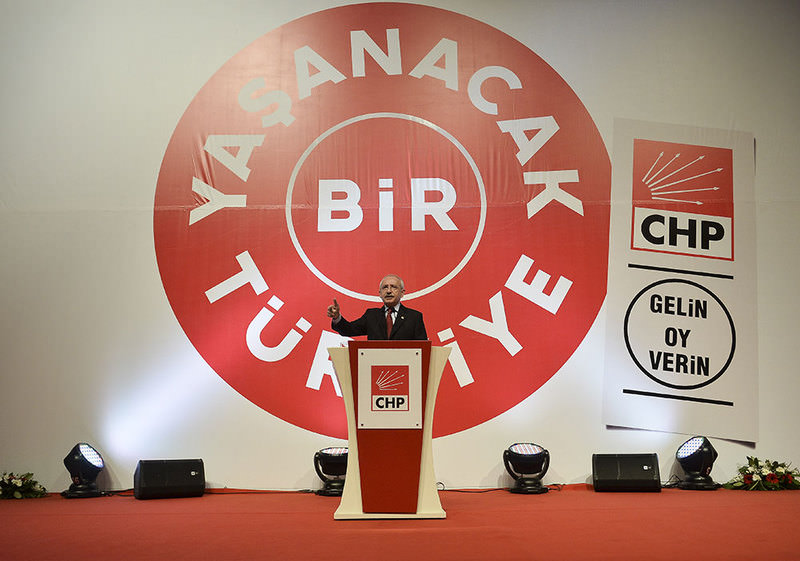 by daily sabah Apr 19, 2015 12:00 am
With the help of famed advertiser Ali Taran, the main opposition Republican People's Party (CHP) announced its promise-filled election manifesto for the upcoming June 7 elections in a meeting in Ankara on Sunday.

Taran gained fame when he ran the Young Party's (GP) electoral campaign in the 2002 general elections, in which the GP won 7.2 percent of the vote. Taran drew crowds to rallies with free food and a free concert, and built his election campaign on populist promises such as doubling the minimum wage and reducing diesel prices to TL 1 ($0.40). The main opposition CHP's election manifesto was reminiscent of Taran's electoral campaign for the GP, which faded from Turkish politics after its unexpected 7.2 percent turnout.

Reducing the diesel prices used in agriculture to TL 1.5, to one-third of its current price, was also among the CHP manifesto.

The party will use "A Liveable Turkey" (Yaşanacak bir Türkiye) as the main slogan of its election campaign. The CHP promises a comprehensive reform and the strengthening of the existing parliamentary system and limit the powers of the president to counter the AK Party's promise to switch to a presidential system. The CHP manifesto however did not touch much on the reconciliation process that aims to end the armed conflict with the PKK.

CHP Chairman Kemal Kılıçdaroğlu gave a long speech, with a special focus on the party's economy policies, in which he promised to carry out most of the promises within the first 100 days or the first year of a possible CHP government.

The CHP's most striking election promises were on the economy, as the party promises to increase the minimum wage from TL 949 ($354) to TL 1,500. The party aims to provide a million additional jobs in the near future and reduce unemployment to below five percent and inflation to four percent. Vocational boarding schools will be established in all organized industrial zones and will guarantee their graduates internships and jobs, the manifesto says. Sectorial incentives will be the focus rather than regional incentives for industries. The manifesto also promises interest free credits for small and medium enterprises without tax or social security debts, while promising a special ministry for SMEs.

All of 800,000 sub-contracted public employees will be hired as permanent staff, Kılıçdaroğlu said during his speech.

"We will strengthen the social state. I call on 17 million poor citizens, whom have less than TL 200 as monthly income. I promise there won't be poor people in Turkey in four years," Kılıçdaroğlu said. The party proposes "family insurance" as a solution in its election manifesto and says that no families will have an income less than TL 720.

Another striking promise, which has been widely debated, is to give two additional monthly pensions to the retired. The party also promises to bring 2.2 million people into the realm of general health insurance and five million people into the realm of social aid. Additional monthly benefits will be given for families who have a member carrying out his military duty, for citizens over 65 years and for the disabled, which range from TL 240 to TL 600. Some 50,000 disabled will be employed in the public and private sectors, while free healthcare is also promised for the disabled.

Affordable public housing through TL 277 installments was another striking point in the CHP's election manifesto. Kılıçdaroğlu promised to restructure debts, especially for credits and credit cards by erasing 80 percent of the interest payments, pointing out that financial institutions already carry out the same practice by transferring their overdue receivables at rates for one-fifth or one-sixth of the original payment.

Kılıçdaroğlu said that political ethics law will be legislated in the first 100 days if the CHP form the government after the elections.

The CHP promises to lower the national election threshold to five percent from ten percent, while an amendment to election legislation is being proposed for five million Turkish citizens living abroad to be represented by their own deputies in Parliament.

The party's main promise in the education field is to remove the Higher Education Board (YÖK) and to grant autonomy to universities. Each year, at least 15,000 university graduates will be sent abroad to study, the election manifesto said. The CHP aims to change the education system to 13 years of compulsory education, including a year of preschool education. The party also promises grants for university students.

The CHP states that compulsory religion and ethics course will be removed and Cemevis, Alevi houses of worship, will gain official status.

For the judiciary, the CHP aims to form a separate judicial police to assist the judiciary in investigations. High Council of Judges and Prosecutors will be separated and the power of the Justice Minister and Undersecretary over the councils will be diminished, the manifesto says.

Regarding Turkey's Kurdish Issue and ongoing reconciliation process, Kılıçdaroğlu said peace will be constructed by the CHP, and the party's four conditions regarding the conduct of talks have not been met, which promotes transparency in the talks and bringing the issue to the parliamentary level. The party proposes a parliamentary commission to investigate all torture and unidentified murder cases, while removing a statute of limitation for such cases. Native language courses will be provided if demanded, the manifesto said. Promises to open state archives on Dersim incidents of 1930's, turning Madımak Hotel and Diyarbakır Prison into museums were also present at the CHP's manifesto.

The party promises to end the use of tear gas for crowd control, while stating that legal amendments will be made to prevent the use of disproportionate force, illegal wiretapping and authority abuse by security forces.