HDP raises the stakes by promising to double minimum wage 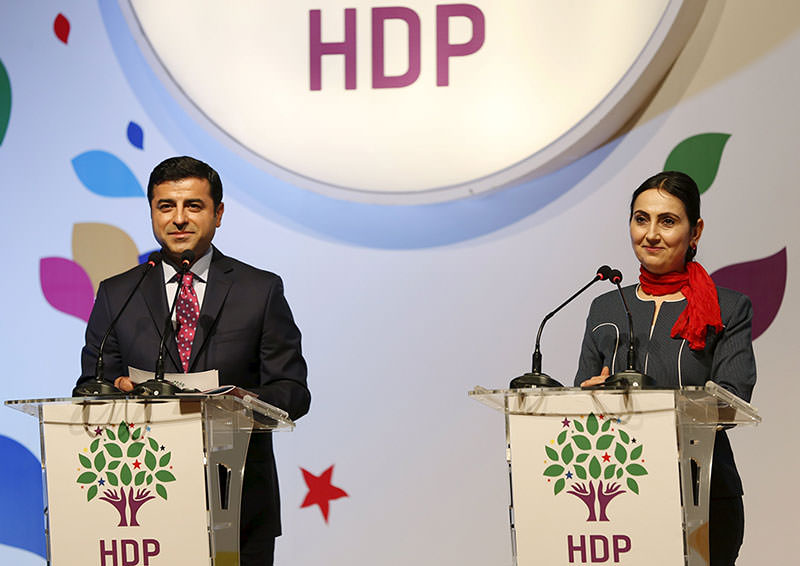 Co-chairs of the pro-Kurdish Peoples' Democratic Party (HDP), Selahattin Demirtau015f (L) and Figen Yu00fcksekdau011f, attend a meeting to announce their party's manifesto for the upcoming general election, in Istanbul on April 21, 2015 (Reuters Photo)
by daily sabah Apr 21, 2015 12:00 am
The co-chairpersons of People's Democratic Party (HDP), Selahattin Demirtaş and Figen Yüksekdağ, have announced the party's election manifesto for the upcoming June 7 elections on Tuesday, drawing attention by their promise to increase the current minimum wage from 949 ($352) TL to 1,800 TL ($670).

Last week CHP announced its election manifesto, which had promised 1,500 TL ($559) for minimum wage. HDP raised the stakes even further on Tuesday by increasing this amount to 1,800 TL, as well as for the minimum retirement pension. Another striking election promise is to decrease weekly working hours from the current 45 hours to 35 hours without any salary loss.

HDP's manifesto includes twelve sections, with specific pledges to particular groups including women, young people and workers. Yüksekdağ said they want "a new life", adding that the HDP would unite the country, and stand it on its feet.

HDP also puts great emphasis on the youth's right to speak, decide and participate in its manifesto, promising to decrease the voting age to 16 from 18 while lowering the age of candidacy to 18. It also promises to carry out a project called 'Young Life Card' ("Genç Yaşam Kartı" in Turkish), which is planned to provide free entrance to museums, social and cultural activities as well as 200 TL ($75) support for communication and transportation expenses per month for the youth.

A 250 TL ($91) rent support for lease-holders who do not have any property was among the other economic promises of HDP. At the same time, every house will benefit from 10m3 water and 180kW/h electricity per month free, the manifesto says.

The co-chairmans Demirtaş and Yüksekdağ also emphasized the importance of everyone's right to practice their own identity and culture through democratic autonomy. Known to have nominated the most female candidates out of the four major parties, with 268 candidates out of a total 550, the party is also making important promises to women. Demirtaş and Yüksekdağ promise to provide more free living spaces and women's shelters and to declare International Women's Day on March 8 as public holiday. On gay rights, the party promises to fight against homophobia and take steps to recognize gay people's preferences and equal citizenship in the constitution.

HDP also touched upon the governance system of Turkey. According to their idea of new Turkey, the central government's importance will decline, with local authorities will be empowered. The manifesto also reiterated that the party is against the executive presidential system proposed by the ruling AK Party and promised that the HDP would abolish the country's 10 percent election threshold.

On its other pledges, the pro-Kurdish party said it would create parliamentary immunity, with only the chairperson's immunity being left intact within the scope of freedom of speech. Members of parliaments will also not receive any salary increase for four years, with regulations leading to automatic payments being cancelled.

On judicial rights, everyone will be able to receive court services in their own mother tongue, and those being judged will no longer have to bear the cost of translation fee services at court, with the government covering this fee.

The manifesto also touched upon the ongoing reconciliation process, saying, "Our party will, in our circumstances, defend unarmed reconciliation and democratic politics." The injured parties will be compensated in this framework, while those who have been displaced from their lands due to the 40-year long armed struggle of the outlawed PKK against Turkey, will return to their lands.

The pro-Kurdish political line, currently represented by HDP, used to run for parliamentary seats with individual independent deputy candidates in earlier elections, in order to by-pass the 10 percent national threshold, but in the upcoming June 7 elections, HDP will – for the first time ever – enter the race as a unified party.

Although countless observers and researches have made it clear that the 10 percent threshold looks to be quite an ambitious number for the party to reach, HDP's co-chairman Selahattin Demirtaş thinks otherwise. He recently stated that the party will "break imaginary threshold" in the upcoming elections. Demirtaş had received 9.76 percent of the vote in the August 2014 presidential election, which he believes the party can now attain and surpass on its own.