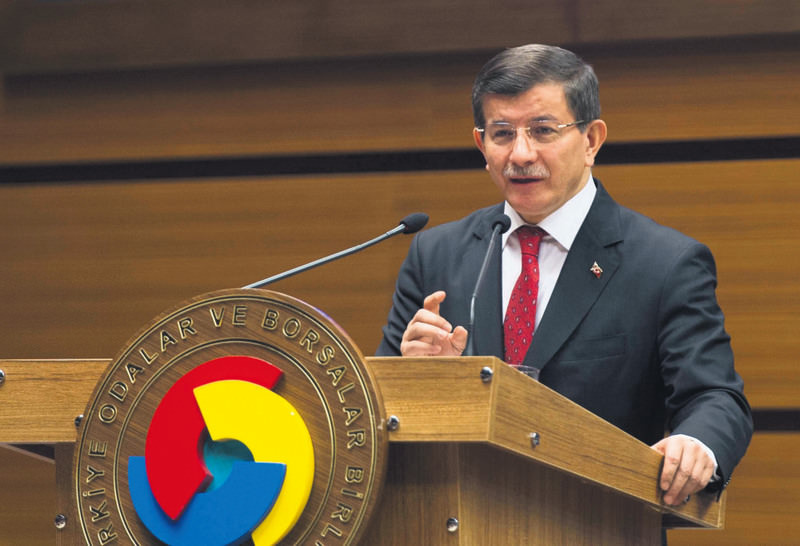 Referring to the opposition party, the Republican People's Party (CHP)'s election manifesto, Davutoğlu said that any kind of call for a coalition is unrealistic and the CHP's election promises all consist of projects already implemented or scheduled to be implemented by the Justice and Development Party (AK Party).

Criticizing promises made by CHP leader Kemal Kılıçdaroğlu regarding the economy, Davutoğlu said that the habits and applications implemented in the old Turkey will not exist in the future, and therefore, "the time for distributing resources you do not have, giving promises you cannot keep and trying to hold on to the government with coalitions was over." He also underlined that the cost of such promises would mean a loss of TL 150 billion ($55 billion) for Turkey.

He further pointed out that while the current acco

unt deficit was 10.8 percent in 2002 when the AK Party came to power, it has dropped to 0.7 percent. "If Kılıçdaroğlu realizes what he is promising, the current account deficit would increase by 10 percent and the Turkish economy would return to where it was in 2001," added Davutoğlu. The prime minister also said that Kılıçdaroğlu might even cause Turkey to become indebted to the IMF in case of a coalition government including the CHP.

He also accused the CHP's election manifesto of being manipulative and populist and full of promises that cannot be kept, which in return, will damage the political stability in Turkey. The prime minister said that in contrast, the AK Party has withstood and succeeded in such tests before, and will succeed again with the support of the public in the upcoming elections. Davutoğlu also harshly criticized Kılıçdaroğlu, accusing him of acting like a teenager, while he said that he meant no disrespect to teenagers. "He is acting like a teenager who is approaching the matter of ruling the nation by dreaming about what he would do if he had the family's budget to rule and is giving out promises based on such an assumption," said Davutoğlu.

The Chairman of the Turkish Union of Chambers and Commodity Exchanges, Rifat Hisarcıklıoğlu, said that there is mutual dialogue, empathy and common wisdom established between the public and private sector, thanks to the dialogue mechanisms established by the Union.

Hisarcıklığolu also underlined that the council is the biggest and the most comprehensive meeting that brings together all sectors and that the sector assemblies consist of 40 of the biggest firms in each sector. He also stated that with these council meetings, separate sectors are more informed about each other. Stating that in each sector council, a representative from the related public office is present, Hisarcıkloğlu said that these sector assemblies are mechanisms that bring together the private sector with the public administrations to discuss and work on solutions and consult each other, and also enable any kind of suggestion and request of the public sector to be submitted to the related public administrative offices.
Last Update: Apr 21, 2015 11:50 pm
RELATED TOPICS