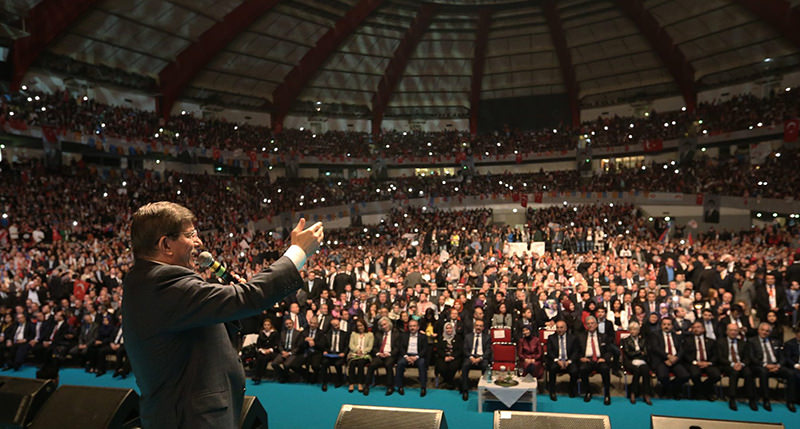 | AA Photo
by Anadolu Agency May 04, 2015 12:00 am
Prime Minister Ahmet Davutoğlu has voiced concerns over the growing number of xenophobic attacks against immigrants and Muslims in Germany and Europe, calling on politicians to take a strong stand against racism and Islamophobia.

Speaking at an inauguration ceremony of the new Turkish Consulate General building in the west German city of Dusseldorf on Sunday, he called for action to curb the problem.

Davutoğlu said: "The emergence of [xenophobic] movements in Europe, and especially the Islamophobic acts and attacks against many mosques, are a source of great concern for all of us.

"Today, the biggest threat for our common home, our continent of Europe, is xenophobia and other ethnic, religious or sectarian differences."

"The basic value that we should strongly sustain for the future of our continent is to protect human dignity and ensure a cultural environment in which everyone can freely practice his or her religion, faith and beliefs," he added.

Turkey has repeatedly expressed concerned over the increase in suspicion and negative feelings in recent months towards Muslims in Germany, which contains the largest Turkish diaspora abroad - an estimated 3 million people of Turkish origin - as far-right and right wing populist parties seek to benefit from a growing fear of Islam and Muslims, largely influenced by the so-called "war on terror" and reports of atrocities committed by the Islamic State of Iraq and al-Sham (ISIS) in the Middle East.

Davutoğlu said Turkish immigrants who came to Germany in the early 1960's as "guest workers" had made an enormous contribution to the German economy, and a new generation of Turks had become an integral part of multi-cultural German society.

"We regard the Turkish community here in Germany as something that enriches Germany and Europe, with social and cultural aspects," Davutoğlu said.

He said third- and fourth-generation ethnic Turks were a "dynamic source of economic development" in Germany.

"Today in Germany, Turkish immigrants own around 90,000 enterprises that have a turnover of 45 billion euros and around 400,000 employees," he said.

Davutoğlu has called on Turkish immigrants in Germany to do more to integrate more effectively into society, but oppose any attempt to denigrate Turkish identity or history.

He told more than 10,000 Turkish immigrants at a rally in the western German city of Dortmund on Sunday: "You should get involved in the social, political and economic life of the country you are living. You should learn perfect German and perfect Turkish."

He praised the young generations of Turkish immigrants for their achievements in German society, and said they have enriched the plurality of Germany and Europe.

He said: "We do not need anyone telling us about integration. We are achieving integration.

"But as we have always said, we will never accept assimilation … You should preserve your culture, identity, language and religion."

Davutoğlu addressed Turkish immigrants at the invitation of the Union of European Turkish Democrats (UETD), a conservative and influential organization of ethnic Turks in the country, ahead of June 7 parliamentary elections in Turkey.

Among the 3 million ethnic Turks living in Germany, around 1.4 million of them are Turkish citizens who are eligible to vote for June 7 elections.

During his address to Turkish immigrants lasting more than an hour at Dortmund's Halls of Westphalia, Davutoğlu praised "historical" and "friendly" ties between Germany and Turkey, but sharply criticized a motion submitted to the German parliament last month, labelling the forced relocation of Armenians under the Ottoman Empire as "genocide."

Davutoğlu said the Turkish government had long been open to any debate on the issue and supported reconciliation with Armenia, but opposed the politically motivated moves of third countries.

"If those who are not looking at their own history but try to give us a lesson, we are telling them in a clear and open way. We will never make our history, our honor, a matter for discussion," he said.

He lashed out at German lawmakers who argued Armenian claims of "genocide" concerning the events of 1915 should be taught at German schools to enhance "integration" of ethnic Turkish children.

"Nobody can teach our children with a curriculum that denigrates our history," he said.

His comments were met with applause and slogans.

The controversial motion on the incidents of 1915 is currently under discussion at the Foreign Affairs Committee of the German Parliament.

Davutoğlu also expressed his concern over growing racism and Islamophobia in German society and promised Turkish immigrants that Turkey will continue to raise the issue in talks with the German government.

He said the Turkish embassy and consulates were instructed to closely follow each and every incident targeting Turkish immigrants and would show the utmost care.

"In 2014 alone 22 mosques in Germany were attacked. Many of our cultural centers were attacked by those who wrote defamatory words on the walls of these centers," Davutoğlu said.

He urged Turkish immigrants to be careful of being provoked.

"In such incidents please remain calm and seek justice in a peaceful way. Protect our holy places but never and never attempt violence. This is something that racists do," he said.

Davutoğlu expressed Turkey's support for a united stance among European governments against terrorism, but said that such a stance should also be the case against racism and Islamophobia.

He said: "I would like to call again on all European governments, and particularly our friend, Germany.

"Let us all protect the cultural plurality in Europe. Let us all live together in Europe with a culture of plurality, which respects human rights. Let us all stand united against terrorism. But similarly we should stand united resolutely against Islamophobia and enmity against Turks."

Germany has the second-largest Muslim population in Western Europe after France.

Among the 4 million Muslims in the country, 3 million are of Turkish origin.

Germany's leading Muslim organizations have repeatedly said the source of the radicalization of some young immigrants in Europe is not Islam itself, but the sociological problems they face, such as discrimination, unemployment or a lack of future prospects.