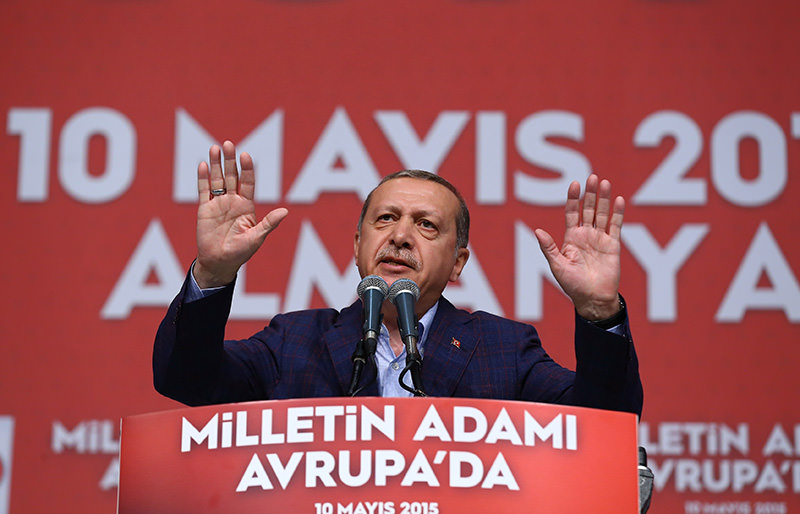 | AA Photo
by Serdar Karagöz May 10, 2015 12:00 am
During his visit to Germany and Belgium on Sunday, President Recep Tayyip Erdoğan urged Turkish communities in Europe to go to the ballot boxes in consulates to cast their votes for the upcoming June 7 general elections.

Addressing thousands of Turks at a Youth Meeting organized by the Union of European Turkish Democrats (UETD) in Karlsruhe, Germany and Hasselt, Belgium Erdoğan highlighted the importance of unity among the Turkish communities in Europe and emphasized the importance of the nearly 1.5 million people in Germany who are eligible to vote in Turkish elections. "Casting your votes is not a hassle, but is in fact an opportunity. The place where you can show your power is the ballot box, not the weapons in mountains," he said, implying the PKK's reluctance in laying down arms.

After mentioning that the ruling AK Party paved the way for Turks living abroad to vote in Turkish elections in the countries where they live, Erdoğan stressed Turkey's growth in the past decade, citing a statement by German President Joachim Gauck. "During a talk with the German president he said, 'I see how level of welfare has increased in Turkey. I felt this during my trip [to Turkey].' You are the most valuable source of Turkey's regional and global power," Erdoğan told the crowd in Karlsruhe.

The Supreme Election Board announced earlier that 112 polling stations would be opened in 54 countries to serve the almost 3 million Turkish nationals living abroad. Turks living in Germany, Australia, Austria, Belgium, Denmark, France, Switzerland and the Turkish Cyprus will be eligible to vote May 8-31.

A total of 33 Turkish airports and seaport customs offices opened polling for Turks who live abroad, but find themselves in Turkey during the elections. They will remain open until June 7, the day the country goes to the polls to choose their lawmakers. Voters have to bring their national ID card, passport or a document that shows an ID number in order to be eligible to cast a ballot.

Polling stations for Turkish citizens living outside the country who will cast their votes at border-crossing points will be open until June 7. Turkish nationals in Norway will vote May 22-31 and those in Romania will vote May 28-31. Polling stations will open on May 29 in Bulgaria, the Netherlands, Italy, Canada, Saudi Arabia and Turkmenistan.