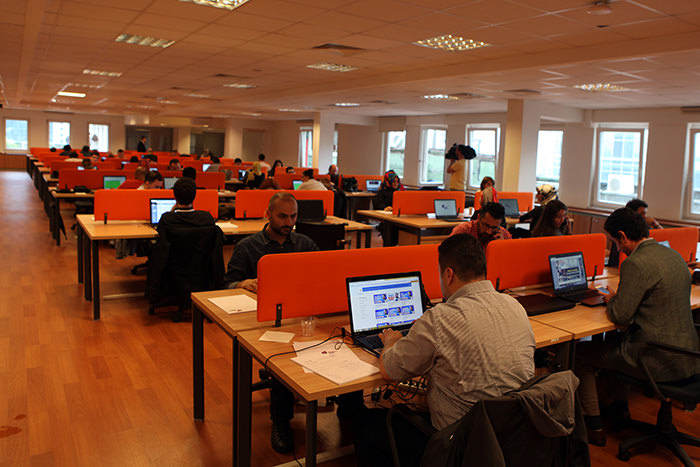 |File Photo
by Daily Sabah May 11, 2015 12:00 am
AK Party's campaigns in digital and social media for the general elections are now managed by a team of 180 people at New Turkey Digital Office (YTDO). The office which was founded for the election and employs many experienced names in digital communication industry is composed of four main working units including content producing, social media interaction, reporting and campaign ambassadors.

The team which manages the digital operations of the election campaign also undertakes the digital coordination of the practices on the field. Within the New Turkey Digital Office, the digital corporate identities of the candidates are prepared and digital as well as social media strategies of the campaign are determined. The social media movements of rival political parties are monitored all the time and reported following a detailed analysis.

Digital and Social Media Corporate Identity Guide which is an important leg of the campaign is being used by AK Party for the first time in Turkey. Twitter, Instagram Google+ and Facebook pages as well as the official websites of the candidates are re-designed according to the digital corporate identity. New Turkey Digital Office also works in coordination with the social media teams of the candidates. A strategy regarding a large content including tens of thousands of tweet, Facebook posts and blog have been determined. Moreover, AK Party volunteers also help the campaign grow bigger with their own posts.

"For us, digital platforms do not just consist of social media. We handle advertising and promotion works with a 360 degree point of view. We undertake everything, from the management of candidate' digital and social media profiles to deliver campaign messages in collaboration with our friends working in the field. Digital campaign is enriched with the feedbacks coming from the field. We embrace a viral interaction social media strategy which enables people to speak. In accordance with the motto "They Speak, AK Party Does," we pay attention to tell all the actions and operations carried out by AK Party over a course of 13 years in line with the essence of digital platforms. We strengthen our messages adjusting the information and ideas of our volunteers working in the field to our campaign process. New Turkey Digital Office is not just a platform where we deliver messages. It is a digital process which we receive feedbacks, report them and include our works. The element of human is in the center of our organization. With the digital communication criteria that we set in the beginning of the road, we systematically include social media to an election campaign as a main component for the first time in Turkey."