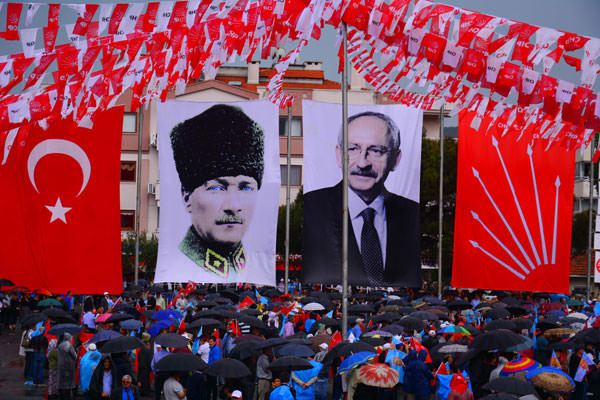 by Daily Sabah May 11, 2015 12:00 am
The main reason behind Turkey 's main opposition Republican People's Party's (CHP) distant stance in its campaign for July 7 elections against the country's Kurdish voters is based on a strategy derived from voter analysis and profile report.

The report prepared by Sencer Ayata, an academician and the vice chairman of CHP, indicates that the party can only receive 1.5 percent of the total 14 percent Kurdish votes in Turkey. The CHP had received poor results in 2011 and 2014 elections in eastern and southeastern Anatolia regions which contain most of the Kurdish voters.

The CHP does not have an agenda for Kurdish people's rights and is not pledging any solution for the Kurdish issue in their July 7 general election campaign, while aiming its pledges mostly at retirees and minimum wage earners. 11 eastern Anatolian cities, including Şırnak, Hakkari, Batman, Bingöl and Muş, have a majority of Kurdish voters and CHP hasn't planned to organize rallies in any of these cities.

An earlier report presented to the CHP chairman Kemal Kılıçdaroğlu proposed that Kurdish voters did not appreciate CHP's cold stance towards the reconciliation process and saw the party as an "Ankara Party" that aims to preserve the status quo in the underdeveloped eastern and southeastern Anatolia regions. Hence, one of the main concerns of CHP is losing their votes to the pro-Kurdish Peoples' Democratic Party (HDP) in major cities such as Izmir, Istanbul, Mersin and Adana.

In Ayata's report, it has also been revealed that there is strong hostility towards CHP in Turkish society. The report suggests that 30 percent of total Turkish voters say "I will never vote for CHP no matter what" and see the party almost as an enemy. The report also said that CHP receives the most votes from white-collar workers with relatively higher wages, adding that the votes from this group should not remain to be considered as "easy" votes for the party. Ayata's report emphasized that there are still 30 percent of voters with loose party affiliation and CHP should aim to receive votes from this group.

The CHP has been considered as the "party of the elite class" and "party of the shores" since 2002, as they receive the most votes from the upper crust of the society living in the Aegean and Mediterranean coastal cities and towns as well as large metropolitan areas.